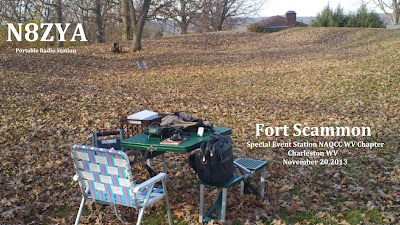 I worked seventeen stations with this “Special Event Station” of the West Virginia Chapter of the NAQCC club on Wednesday afternoon and sent an E-QSL Card to those who worked me. Fort Scammon isn’t well known to those living in my city, but during the Civil War, this artillery site was critical to controlling the river traffic on both the Kanawha and the Elk Rivers. 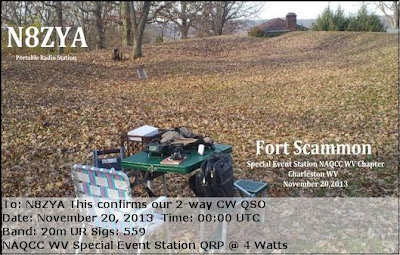 I created the above (sample) card with the simple “paint” program which comes with the Microsoft products on my windows computer. When I upload the card to my E-QSL account and enter the contact information of the stations I work, they’re displayed nicely along the bottom of the card. 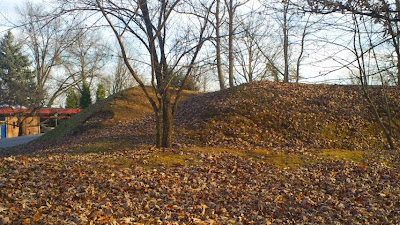 The 19th and 25th Presidents of the United States (Rutherford B. Hayes and William McKinley) directed a dozen cannons from this high spot in Charleston where “flatboats” floated precious “salt” downstream to the Ohio River. Salt was a very valuable commodity in those days for the preservation of fresh meat. The production of high quality “salt” was one of the founding industries of the Kanawha Valley. 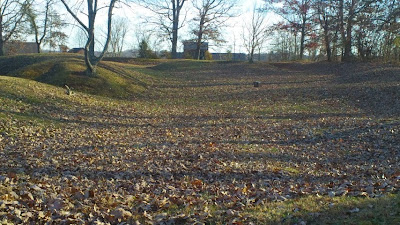 It took me a little over an hour to get set up and on the air but I felt this was one of only a few good days left before snow flurries begin to start flying this weekend. I used my PAR “end fed” Zepp antenna which was cut for 40-20-and 10 meters with my Icom 703 at about four watts to work stations in eleven different states.

The most distant station I worked this day was N1NUA (Joan) in Maine at 812 miles.