30 November 2015 | by Mike VE9KK  |  Share |  Tweet |  Leave a Comment (0)
I had a great part time effort in the CQ WW CW contest, I was not concerned with score or putting in a major amount to time in the contest chair. The key goals in this contest was to see how my CW reading by ear was doing and when on the rig to stay with it for the time I committed too. The reading code by  ear was fine up to speeds in around 25 BUT with some stations they were flying at around 35-40 wpm and that is just to fast. My code reader MRP4066 handled the high speed code no problem this software is not free but I found it to be the best! I entered the contest as single op, QRP single band (15m) and I met the requirements as a "classic" operator  I added this overlay to my submission. My total QSO count was 33 a score of 3,128 points and 10 zones. At my QTH I did not hear the usual amount of European stations I have in the past. My operating time was during the day from late morning to until late afternoon. During the late morning I head mainly Caribbean, African and some European stations but not many. As the afternoon approached more South and Central American stations came it as Europe faded. 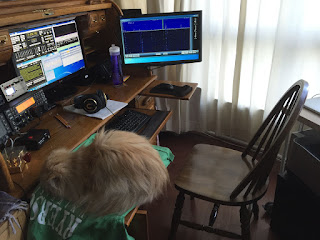 I did have some "Murphy" moments such as…….I was not able to get my MFJ mag loop to tune at all at the start of the contest. Very quickly I found it was a very loose PL-259 connected on the rear of the loop's control box. Then for some reason N1MM+ set my CQ zone as 5 and not 4 and I did not click into this until about 10 contacts into the contest. Finally on the K3 there is a "test" setting and I use it to check macros without transmitting. Then old age had me forget to turn off the test mode, this found me thinking I was calling stations but was transmitting 0 watts….. Now that's QRP!!
Since I am operating QRP and using small MFJ loop antenna on the balcony my operating style was as follows
- I Use my VFO B to save a strong DX station that at the time has a huge pileup going. This stops me from wasting time trying to break the pile. Better to come back when the crazy pileup is gone. This worked great when I came across a Senegal station.
- Even when a station is at an S2 level but is just calling and listening my 5 watts can and did many times make it through for a contact.
- I don't use a spotting network as I found most of these stations have a huge pileup but I do have an Elecraft P3.  Using some hardware and software my P3 is seen on a 19 inch monitor and I am able to point and click on signals. My K3 then moves to that signal this allows me to see the activity on the band and Search and pounce these stations.
- When possible stay with a band such as 15m were my MFJ loop does not need to be retuned at all across the whole CW portion.
- Stick with my 250hz Inrad 8 pole CW filter so I can get between tight signals and only hear the op I want to contact.
In my post I am going to go into detail about my software I am now using and finding to be great for contesting and general QSO's It's now time to grab some eats and relax.


Mike Weir, VE9KK, is a regular contributor to AmateurRadio.com and writes from New Brunswick, Canada. Contact him at [email protected].