It occurred to me recently that the reason why I can rarely bring myself to work anything other than digital modes is because the noise level on the HF bands at home is so high that listening to the radio is too unpleasant. Tune across the band and you hear dozens of carriers against a background of hash and buzz, with odd patches of warbly noises. Although the noise falls off on the higher bands the carriers if anything get worse. Forget about listening for beacons on VHF! I don’t think the problem is solvable, as I believe I am hearing the combined output of all the houses in the neighbourhood, not the product of a single rogue device that could (theoretically) be tracked down and eliminated. So my instinct is just to work digital modes with the volume turned off.

People have often asked me why I don’t operate portable or mobile from the car to get away from all this QRN. My usual answer is that I often operate for an hour or so here and there and it isn’t practical for such a short time as that. Operating from the car on a cold dark winter night isn’t as attractive a prospect as doing it from a warm shack, and my wife would probably take a dim view my going off for three or four hours at a time just to talk on the radio in any case. But Olga is away at the moment and I’m getting fed up with digital modes, so I thought I would give it a go. 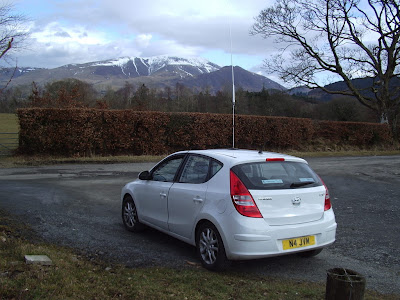 I already had a Superantennas MP-1 which I bought for portable use, but haven’t made much use of it for that due to the British weather rarely being warm enough to tempt me out. (Yes, I know SOTA types operate from hilltops in sub-zero temperatures and howling gales, but I like my comforts and they’re masochists.) A quick trip to Maplin in Carlisle resulted in the purchase of a Moonraker 7 inch Turbo mag mount with the requisite 3/8 fitting. Then I drove out to a quiet spot to try it out. The spot I chose isn’t an ideal radio location as it is surrounded by hills, but I haven’t yet found somewhere with a good take-off that isn’t a “viewpoint” and packed with tourists, or anywhere that I can drive on to the beach.

I took the antenna analyzer along which made tuning the antenna a lot easier. I started off on 15m, where I got an SWR of 1.5:1. For the radio I took along my Elecraft K2, which has been little-used since the K3 came along. I set the power to 12W and searched for someone to work.

My first mobile contact was with John 9H5JW, a British expat living in Malta. He gave me a 58 report to my 59 (he was running 100W). We had a good chat for ten minutes and I felt the MP-1 was doing a really good job.

Next I heard KD4FNI from Ozark, Alabama. He didn’t hear me, unfortunately. My next contact was with Nick RV3EFR near Orel for 59 both ways. Then I tried to call Harry 7Q7HB in Malawi. He was working another mobile in Finland, but unfortunately when he finished there was a bit of a pile-up and he didn’t hear my call. He was strong enough that I’m sure we could have made a contact, as was KP4BD in Puerto Rico whom I also called without success.

My third contact was VU2DSI from near Mumbai in India. He gave me a 56 to his 59. I’m pretty sure I haven’t worked India before, even from home, so I was very happy with this. The /M suffix is really worth about 10dB of gain. “Will the mobile please call again.”

My final contact on 15m was with Mauro I5HOR near Florence. He gave me a 55.

I was pretty happy with those contacts, but I wanted to see how the MP-1 performed on a mag mount on the other bands. On 10m I got a 1.2:1 SWR, though there was nothing to be heard on that band. I went up to 40m and the SWR dip was pretty sharp and would only come down to 3:1. On 20m I got around 2:1, and managed a quick QSO with Franco IZ4NPE for a 58 report on that band, so it was not too bad.

Clearly the poor ground through the mag mount affects the SWR of the MP-1 on the lower bands. The K2 ATU can take care of this quite happily, but possibly performance is compromised as well. A permanent mount on the car isn’t an option, nor would it be worth the trouble for the amount of use it is likely to get. I will have to see if I can drill the mag mount and fit a terminal that would allow me to attach a temporary ground wire to the car body, or even a resonant counterpoise, if that would make a difference.

All in all it was a worthwhile exercise that I’ll probably try again. To make a contact with India from a parked car using 12W to a whip antenna is quite an achievement!