10 September 2014 | by Mike AD5A  |  Share |  Tweet |  Leave a Comment (1)
It's been over a month since my last post. The day job, busy weekends and yes even a little radio have kept me occupied. I won't bore you with the non radio stuff, but I'll try to hit the highlights of the last few weeks.

I've been on a couple of SOTA excursions. The first was mid-August to the Davis Mountains in West Texas. If you have never been there, it is an oasis in the middle of a desert. With mountain elevations in the 6 -7,000 ft. ASL, the climate is much closer to a summer alpine climate than a desert climate. Afternoon showers keep the entire area lush and green. I partnered with Mike,  KD5KC on this trip and did three summits, Pine Peak W5T/DW-003, Summit 6641, W5T/DW-018 and Locke Mount, W5T/DE-003. Locke Mount is the home of the McDonald Observatory.

Pine Peak was a first activation for that summit. It is located within the Nature Conservancy boundary, It is open to the public a couple of weekends a year, so we made sure to be there that weekend. It is a pure bushwhack with no trails to the top, so we had fun making a path. 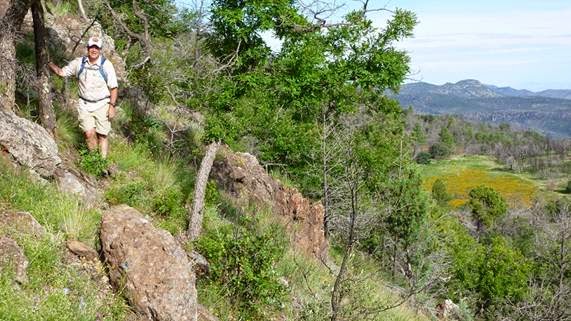 AD5A on Pine Peak Ascent
Over the Labor Day Weekend I was able to do three summits in New Mexico. I didn't take any pictures, but had a great time with Alan NM5S activating Cerro Vista, W5N/SS-010, and Cuchillo De Fernando, W5N/SS-013. My daughter-in-Law, Kat, wanted to do a hike, so she accompanied me on an ascent of Summit 9700, W5N/PW-018.
I've now crossed the 600 point threshold on my way to the 1,000 points required to earn the Mountain Goat award from SOTA.
New Radio
I bought a used X1M Platinum, the 5 band QRP rig from China. I will need to play with it a little more, but so far I'm impressed. For the price, it's a nice rig. I suppose the jury is out on durability, but time will be a good test for that. It's SSB and CW, smaller than the FT-817. It has 80,40,20,15 and 10m bands. However it has the ability to transmit on the other bands, but the filtering would need to be added. I'm sure there are tons of mods for this radio.
I will try to catch up over the next few days.
﻿
Mike Crownover, AD5A, is a regular contributor to AmateurRadio.com and writes from Texas, USA. Contact him at [email protected].

One Response to “Miscelleneous”