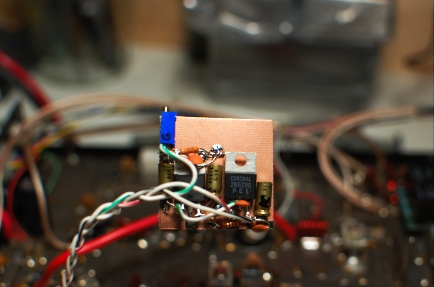 After chatting with Terry, W8ZN, about whether to keep or sell the AM-6155s (which I did sell to finance a tower), he suggested that I apply the N1DPM “Active Bias” modification to my elderly “160-watt” Mirage 2-meter amplifier.  I contacted Fred, N1DPM, and he sent me a copy of his paper Linearization of Solid State “Brick” Amplifiers from the 21st Eastern VHF/UHF Conference (1995), along with some additional notes from his notebook.  It’s pretty eye-opening how non-linear the amp is without the modification!  I finally gathered the parts and hacked it together last night.  Hope to test it soon with a “dummy” transistor and then live on the amp. The braided wires go to the thermal compensation transistor which is thermally bonded to one of the RF power transistors.

It probably won’t be ready for the ARRL June VHF this weekend, though.  So, I’ll only be using the amp on CW.  That’s no matter since I haven’t hung the low-loss cable (LMR and Heliax), nor have I received a D1010 432-MHz amp that will be on its way to me soon.  Everything seems to take longer than it ought to!