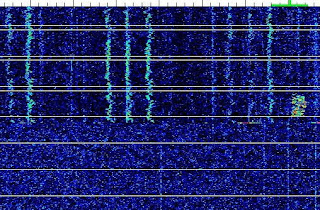 As much as I love CW and try and promote its use on 630m, one cannot deny the growing interest and use of the WSPR mode on our newest ham band.

Its ability to dig deep into the noise and successfully decode signals as weak as -30db makes it an attractive method of watching the night-to-night and hour-to-hour propagation magic.

One only needs to check the number of stations logged into the WSPRnet Activity-page, uploading 630m spots each night ... a typical evening will see 60-80 calls listed.

The main problem with WSPR is that it's a one-way, beacon-only mode and it's not possible to utilize it for a valid two-way contact. It's nice to know that station 'A' is able to hear station 'B', and vice-versa, but the only way for both stations to know this is for them to both be monitoring the internet uploads ... if both stations were able to confirm their respective receptions all via radio, then a two-way contact could be claimed. Thankfully, there is another mode that solves this dilemma, without internet intervention and that's JT9.

JT9, developed by K1JT, is a spin off from his JT65 weak signal QSO-mode software developed for EME. JT9 has been tailored for the noisier HF and MF bands and is apparently, about 2db more sensitive than JT65. In the past, I have made several single-yagi EME contacts on 2m using JT65, with many of these QSO's being in the -27 to -29 db range. This would suggest that 630m JT9 contacts could be made at signal levels as weak as -30db!

A recent "630m Activity Weekend" in Europe turned out be a "630m JT9 QSO Party" with dozens of Europeans working each other throughout the event using this weak signal mode with great success. It looks very much as if JT9 may now be the go-to mode for two-way work on 630m when, as is often the case, signals can be easily seen on a visual waterfall display, but are too weak to be heard on CW.


On this side of the Atlantic, recent JT9 contacts have been made between several of the U.S. experimental stations. WH2XCR in Hawaii (K9FD/KH6) and WG2XIQ in Texas (KB5NJD) worked on Dec 9th, while WH2XGP (W7IUV), WG2XSV (W0YSE/7) and others have been exploiting the power of JT9 to work around the country.

Such has been the case for me recently, with the arrival of VE3OT on 630m. Since beginning his nightly slow speed CW, QRSS6 beaconing, his signals have been easily visible here every night but only strong enough to hear aurally, on two occasions.  It is likely that we could work each other fairly routinely on JT9 but will need to wait for very good conditions to work on CW.

The good thing about modes such as WSPR and JT9 is that they can be used without the need for linear amplifiers in the PA ... class D or E amplifiers, fairly universal in the LF/MF world, can be employed. The most popular route at present seems to be via a homebrew  transverter that will allow the use of the station's main HF transceiver (using the tone-generating JT9 / WSPR software) to generate the required 630m RF.

I've been looking for a new radio workbench project to catch my interest and building a 630m transmitting converter is beginning to look more attractive, now that we have another DX target in VE3 land ... of course, if and when the U.S.A. gets the band, there will be an entire new crew of stations spread across the continent to keep the transverter busy!