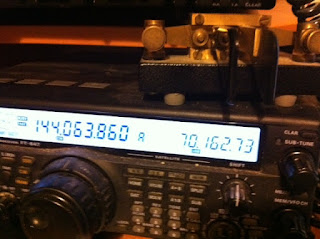 The first weekend in November has always been one of my favourite VHF contests. There aren’t many purely CW contests on VHF these days, but the Marconi Memorial 144MHz is probably the best known. The nice thing is that all over Europe many of the top VHF contest stations and groups take part in the 24 hour event. Quite often at this time of year there is some tropo around and there’s always some meteor reflections too – so there are tantalising hints of contest stations some 1500 or 2000 km away!

These days I don’t treat the Marconi Memorial as a contest but as an exercise in DXing and to see what I can hear and work on 144MHz. This year despite indifferent conditions I was pleased to work TM0W in JN36 at just under 800km – it’s a path that works quite well from here as I see I have worked that station before. DF0MU in JO32 was a nice one too as well as a number of other closer French and Belgian stations. There were hints of more distant Italian and Czech stations, but nothing solid copied.

Although I wasn’t looking to work UK stations this weekend, I did get the impression that there were a few more people from the UK taking part which is good to hear

One Response to “Making VHF go further: Morse can help!”