Today Geoff GM4WHA became the first Wainwrights On The Air (WOTA) chaser to claim a certificate. He worked me on Longlands Fell (LDW-179) thereby completing Wainwright’s Northern Fells having made contacts with stations operating from each of the fells in that book. 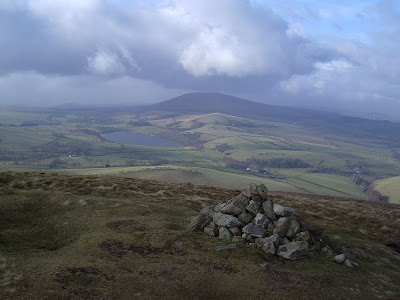 Noticing that a few chasers were just a few fells short of completing a book, I suggested in the WOTA forum that chasers should post the fells they need, which might motivate some activators to go out and activate them. Geoff duly posted, and Longlands Fell was one of the ones he needed. As it is only about 20 minutes drive from here and an easy walk, I thought it would be a good idea to blow away the cobwebs of more than two months of slothful inactivity by activating it. So I did.

Despite an early start (for me) I was lucky to find a place to park at Longlands near the Uldale Common track. The ascent is quite easy up a grass path, but due to the long period of inactivity (and having put on a couple of kilos since Christmas) I had to stop for a breather rather a lot. The photo shows the view from the top with the summit cairn in the foreground, Over Water in the middle distance and the often visited summit of Binsey (LDW-190) in the background. What it doesn’t show was the bitingly cold strong wind which numbed my fingers and made it too difficult to use the 5/8 telescopic antenna.

Despite using a 7in. helical antenna (which tests have shown to perform comparably to a 19in. quarter wave whip and much better than the dummy load supplied with the handheld rig) I made 9 contacts from the summit including the all-important one with Geoff, which is good going from such a summit which is well screened to the south.

I have probably said this too often, but WOTA keeps on getting more and more popular. I’m hearing new chasers all the time – the latest recruit is Steve, M6CDX – and even people who originally said they were getting too decrepit to climb the fells have been heard operating from some of the lower ones. So far this year I have worked 50 different summits and made 72 WOTA contacts from home, not far short of my total for the whole of 2010, and we’re only a bit over half way through the second month. I’m sure others have also noticed the greatly increased activity.

There is great camaraderie among all the participants, too, many of whom feel like old friends even though most of us have never met. I think it is fair to say that the success of WOTA has exceeded my wildest expectations. Combining two of my favourite activities – walking in our wonderful mountains and making contacts on the radio – it doesn’t get much better than this!