When I lived on my parents’ farm in Ohio, I used to install Beverages.  That was back when copper was cheap and I bought 500-ft rolls of #14 THHN for $10 each.  N8ET gave me some ferrite toroids (of unknown mix, probably 77) and I added some parts from RadioShack to build some killer listening antennas.  The best setup was three unterminated (bi-directional) ones that covered the compass.  When I lived in Minneapolis, I went to W0AIH to operate the low bands.  And, when I lived in Urbana, IL, I didn’t operate 160 and didn’t need the low-noise receiving antennas—or I went to NO9Z.  Now, I live in the suburban wasteland between Washington and Baltimore.  It was time to do something about the receiving situation.

Armed with my (autographed, no less) copy of ON4UN’s Low-Band DXing, I began thinking of what options I had.  A small RX 4-square developed by K9UWA, W8JI, and others was appealing.  But, it’s too large to fit comfortably on my lot.  I considered a pair of short verticals with a phasing box (a project that has been in my queue longer than any—since 2003).  But, I ended up settling on the K9AY “loops” because they are small and portable, having an integral ground radial and a single ground rod.

When I lived in Urbana, I had considered doing a set of K9AYs.  So, I had purchased the parts to build a nice balanced preamp based on a QEX article by IK4AUY (this design is actually based on an even older Ulrich Rohde design).  Note that the version of this preamp presented in ON4UN’s Low Band DXing, 4th edition, is wrong—if you see IK4AUY’s web site you shouldn’t miss it.  Several months ago, I had assembled one on a perfboard (and tested it—so I thought).  When I tried the preamp again over the weekend, it didn’t amplify the signals on the antenna side.  The 2N5109 transistors are heat-sinked and so should get warm to the touch during operation.  They did not.  This suggested that they weren’t even being biased properly.  So, armed with a DMM and the schematic, I started following the Vcc line.  Megaoops.  I failed to connect the collectors to Vcc.  That fixed the problem and the preamp worked like a charm. 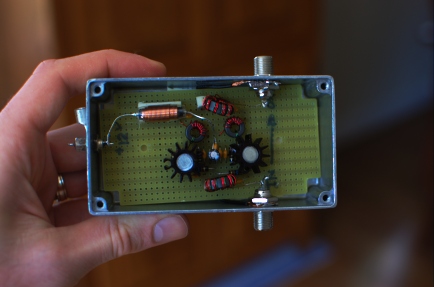 I built the classic K9AY crossed loops at 90 degrees for four-direction switching.  Here’s my switchbox (built using 48-volt relays scavenged from the AT&T Long Lines system in the post “Resume of a Master Dumpster Diver“). 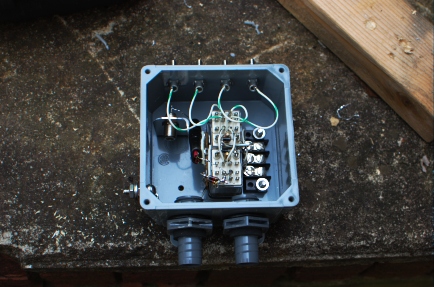 This box may have layout problems.  If you’re an expert on K9AY loops, please weigh-in.  The terminal strip at right is for the control wiring.  I had originally planned to run Siamese RG-6 (scavenged from a DBS installation initiated by some lying, theiving, lazy, pot-head, good-for-nothing duplex neighbors we had in Urbana—they also discontinued our shared “free” Cable) so the loops could be independently switched and shared between two transceivers.  But, when I suggested this idea to K9AY, he told me that the loops couple strongly with each other unless the unused loop was left floating.  (If this idea actually did work, you could use two transformers on each loop, one in place of the termination, like a reversible Beverage…hmmm…for maximum flexibility.)  Instead, I built the regular control box, with a scrap of CAT5 cable as the control cable. 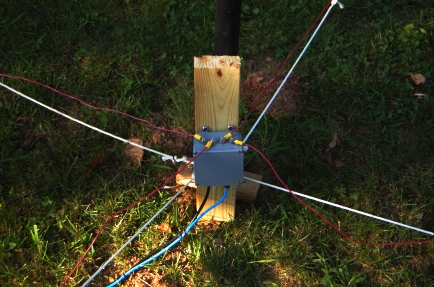 The loops are 80% of full size due to the amount of space (and wire) I had available.  I terminated them with a 330-ohm resistor, although I’m having a hard time getting a null.  Unfortunately, this is one of the best sites in my yard, yet it has a rusty metal fence (i.e., lots of little diodes on a big antenna) on two sides, a 30-ft mast and my 80-meter vertical on the other two sides.  So, it’s not entirely unexpected that I’m not getting a null.  I suspect that the neighbor would let me install it in his back yard, but I don’t want his landscape guys to hit the cables.  This may become an option.

After conferring with N3OX, I tried putting a 500-ohm potentiometer on the termination point.  But, that didn’t seem to help.  I probably should bring a receiver out to the antenna when I do this…shouldn’t have sold that FT-817.  I checked the potentiometer with my antenna analyzer and it looked pretty reactive.  So, that could have been part of the problem.  For now, I have the 330-ohm resistor in there and get 10ish dB F/B when I’m lucky…