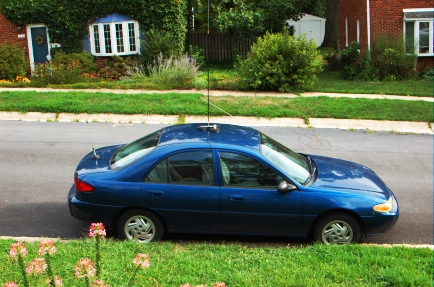 When we got married, the Escort I was driving had gone to my parents in exchange for a larger vehicle with an automatic transmission and a 6-cylinder engine (all three points nods to Sarah, although I admit that it was a much better ride for the kind of driving we did).  With the transfer of the Escort, my HF mobiling days were on hold, although I kept the gear.

In order to finance a DSLR a couple of years ago, I sold-off some ham gear I wasn’t using, notably the HF mobile equipment.  I didn’t manage to sell the tri-magnet mount I borrowed from N8ET for the 2004 MnQP and a rather dismal attempt at WiQP.  This mount had an interesting life, which included being destroyed at 75 mph on I-94 north of the Wisconsin Dells.  I drop-shipped a replacement to N8ET, but had the good fortune of finding similar donut-shaped magnets and some heavy adhesive vinyl at Ax-Man Surplus.  So, with a little epoxy and elbow grease, I fixed the mount while I was still in Minnesota.  It lived to ride again in several QSO parties before my futile efforts to sell it.  I raised the requisite capital for the DSLR before the mount sold.  So, I kept it.

When we moved the DC area, it quickly became apparent that we were going to have to relinquish our delightful position as a one-car couple and the Escort returned to our lives, probably to the chagrin of my father and delight of my mother.  Dad later passed along a Yaesu FT-5100 and mag-mount VHF/UHF mobile antenna which I promptly installed.  But, I really longed for HF CW in the car like the good old days.  So, a few weeks ago, I plunked-down $30 for some knock-off Hamstick-type HF antennas for 20 and 40 and put the Yaesu FT-840 back in the car.  (Astute observers will note that I have a 100% Kenwood fixed station and a 100% Yaesu mobile station.  The IC-290H and the DJ-580T are anomalies that I permit to persist in my life for various reasons.)

There is nothing like listening to JAs via long-path on the way to work…and getting funny looks from the other commuters at the same time.  A car full of teenagers waved once.  Friends and relatives have called it everything from “a space ship” to “a hunk of junk” (thanks, Rachel).