The K144XV eventually turned up late on Thursday afternoon. After the board modifications had been performed, installing the transverter module was easy following Elecraft’s exemplary instructions. I had to remove the KIO3 module in order to remove the KXV3 transverter module and replace it with the KXV3A, which has a couple of additional connectors for the internal transverter, then replace the KIO3. I also had to replace the side panel of the K3 with one that has some extra holes for securing the transverter. The stiffener that runs across the top of the case is also replaced by one with a cutout where it passes over the K144XV. 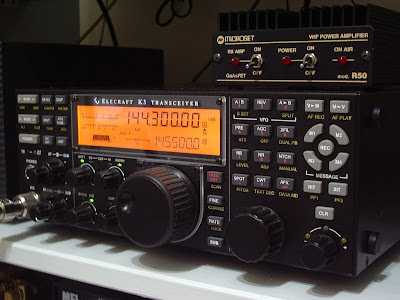 Due to the lateness of the hour I was a bit tired and also focussed on getting the job finished so the shack could be restored to normality so I never even thought about taking some pictures. The module comes as a complete screened box not a bare board as shown in some of the pictures on the Elecraft website. It is quite a little beauty and the way it all fits into the K3 is a work of art.

Although described as a 10W module the instruction manual states that you should get at least 9W with 1.0mW input to the transverter. I actually got about 11W so the power output comfortably exceeded spec. At my noisy location I can’t make any meaningful observation about sensitivity – any half decent 2m radio will be sensitive enough. But I did notice that S meter readings are extremely low. I see no movement at all on a clear frequency despite the noisy location and a repeater that lights all the signal strength bars of my TM-D710 registered just S4 on the K3. I never take any notice of S meters anyway so I’m not unduly bothered. The amplifier “brick” I will use with this has its own built-in preamp which will boost S meter readings if I want.

The 2m amplifier I have was designed to be driven by an FT-817 so it only requires an input of 5W. I found that I needed to reduce the drive to the transverter to a mere 0.15mW to achieve this level of output. I don’t know how accurate the low level output power settings of the K3 are but the relationship between 28MHz drive in and power out is definitely not linear. However the signal on SSB sounded pretty clean when monitored on the FT-817.

The calibration of the transverter local oscillator is done using software, not by trying to tweak a trimmer capacitor by a fraction of a hair’s breadth, which is a blessing. There are two local oscillators in the transverter to provide coverage of the full US 2m band (144 – 148MHz) using the same 28MHz – 30MHz range (interestingly the top 2MHz is not disabled in European rigs.) The transverter module is calibrated at the factory and you have to enter the calibration values into the K3 using the configuration menu. I checked the result using my FC-1 frequency counter and also my FT-817 and it appeared to be accurate to within 100Hz which is about as good as I can get. Later I listened on the GB3VHF beacon frequency and waited for the beacon to come out of the noise. I believe this beacon’s frequency is GPS locked. The frequency appeared to be out by 120Hz so I was able to adjust the calibration value and get it spot on.

The signal to noise ratio on a weak FM signal is definitely better on the K3 than with my other 2m rigs but I don’t see the K144XV as being the solution for people whose primary interest 2m FM. One reason is that a 2m mobile rig is cheaper and allows you to monitor and work 2m FM at the same time as using your K3 for something else. Another is that the K3 doesn’t really handle channelized operation very well. The memory system has improved considerably since the early days but using the VFO to scan through memories rather than a click stop rotary control doesn’t work for me, especially due to the laggy response of the K3 to the turning of the knob.

But I think the K144XV is an excellent option if you want to work 2m DX. The receiver sounds quiet and clean and having all the QRM fighting and weak signal detecting tools of the K3 available on 144MHz is a real bonus. Now I just have to wait for some 2m SSB activity to try it out!