Alfred Wainwright said that he could not understand why anyone would want to walk round a Lakeland fell when they could walk over it. He never met my wife. Olga has always been a reluctant companion on my summit walks – except a few very easy ones.

In fact, the scenery in this part of the world is spectacular even from the roadside, so it certainly isn’t necessary to climb summits to have a nice walk. Of course, you can’t activate any Wainwrights for WOTA unless you are on the top. But you can still work other people who are on the summits and claim the points for your chaser score. Olga has finally agreed to my doing summit walks by myself. But we still want to do walks together so some of the time I will go for low level walks. 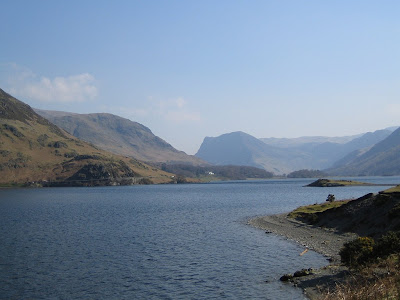 This afternoon there was an excuse for such a walk. Phil, G4OBK had posted that he would be activating Rannerdale Knotts, one of the lowest Wainwrights and one that is hemmed in by higher hills so that it is probably not workable from home. So we decided to go for a walk beside Crummock Water from where Rannerdale Knotts would be in line of sight. As I would be out of range of any APRS digis or gateways I decided to leave the fancy APRS radios behind and take the little Jin Ma Tong JMT-228, a Chinese VHF radio I bought on eBay. As it has mainly been used to monitor my Echolink node the antenna was just a 2 inch long stubby duck. I thought that should be able to make the half a mile path across the lake. I intended to take a better antenna “just in case” but I forgot.

We arrived at the National Trust car park at Scalehill Bridge and I had just got out of the car and switched on the radio when I heard Phil calling CQ WOTA from Whiteless Pike, LDW-106. I stood the radio on the roof of the car while I put on my boots and waited for my turn to work Phil. The audio from the tiny radio was surprisingly load and turned a few heads! Finally I got my report, 5 by 9, and we set off on our walk round the lake. 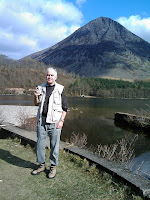 It was a pleasant walk in the warm sunshine with skylarks singing overhead. I heard Phil working Derek 2E0MIX/P and telling him he would be on the summit of Rannerdale in about 15 minutes. We found a sunny spot looking across to the bumpy ridge and waited. Eventually a couple of figures appeared silhouetted against the skyline – Phil and his walking companion Geoff – followed shortly by CQ WOTA on the radio. I called Phil for the inevitable 5 by 9 report and that was that. Rannerdale Knotts, LDW-209, was on the list. We retraced our steps, not wanting to be out too late as Olga had dinner to cook.

Half way back to the car I heard another CQ WOTA, this time from Derek 2E0MIX/P who was on the summit of Grasmoor, LDW-020. I stopped and made contact and had a quick chat with Derek while Olga took the picture on the right using my phone.

Phil had said he was going to activate Whiteside, LDW-084 if he had the time, which he did. I was back home by the time he reached it. I was listening on the JMT-228 and stubby duck antenna from inside the house and Phil’s signal was 5 by 9. (The JMT has quite a decent S meter by the way, it isn’t all or nothing like many handheld rigs.) Phil didn’t hear me until there was no-one else calling him but when he did he gave me a 5 and 5 report. Not bad for 3 watts into what many people would consider a dummy load, over a distance of 10km.

Phil did comment that the audio from the JMT-228 was a bit low compared with my other radios. I don’t think that’s surprising as the radio is probably set up for 12.5kHz or even 10kHz channel spacing, and the level is not adjustable as far as I know. Still, I’m happy with this little radio and I think it acquitted itself very well on its first outing.