I have spent a frustrating couple of hours trying to make a PC cable to communicate with the VX-8GR. In the VX-8 Yahoo group it was stated that the cable is the same as for the Kenwood TH-D7AG a diagram of which is given in YO3HJV’s blog. It was also pointed out to me that there is a diagram in the back of the manual – the one place I never thought to look! 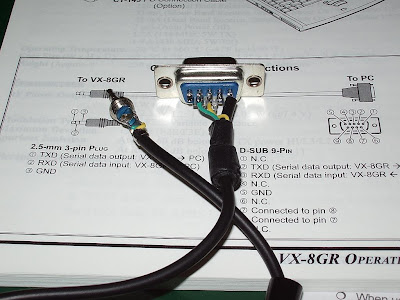 It is easy enough to make up. No level shifting components needed. Just a 2.5mm stereo jack for the radio end and a 9-pin D plug for the PC end. But the damn thing refuses to work.

I have tried a Prolific USB to serial adapter and an FTDI one. I’ve tried the FTBVX8G software and I’ve tried a terminal program to see if I can detect any data. Nothing. Nada. Incommunicado. I know the cable is OK because if I short between tip and ring of the jack plug I can type in the terminal program and see the text I typed echoed back over the connection.

The only thing I can think of is that the standard 2.5mm stereo plugs I have here are a bit too short. It seems to me that the  plug isn’t locking firmly into place, more that the radio is trying to push it back out again. It’s as if the tip needs to be a bit longer to get past the spring loaded contact in the socket. I measure 7/16in from the base of the plug to the tip of it. I had a similar problem trying to make a cable to send audio from my FoxTrak APRS tracker into my Motorola GP300. Then I had a plug from a speaker mic to compare it with and I could see that it needed to be longer.

Perhaps someone who has a VX-8G PC cable that works could measure the plug on theirs. Or perhaps someone will spot the stupid wiring mistake I’ve made from the photo I’ve posted.