How Not to Do a SOTA Activation

This weekend my wife and I were out exploring the San Juan Mountains near Ouray, Colorado. We found ourselves on a Jeep road to Engineer Pass. When we got to the pass, we stopped to have lunch and I examined the high peaks nearby. I saw some people on the summit of one of the peaks, which I determined was Engineer Mountain by looking at a topo map. 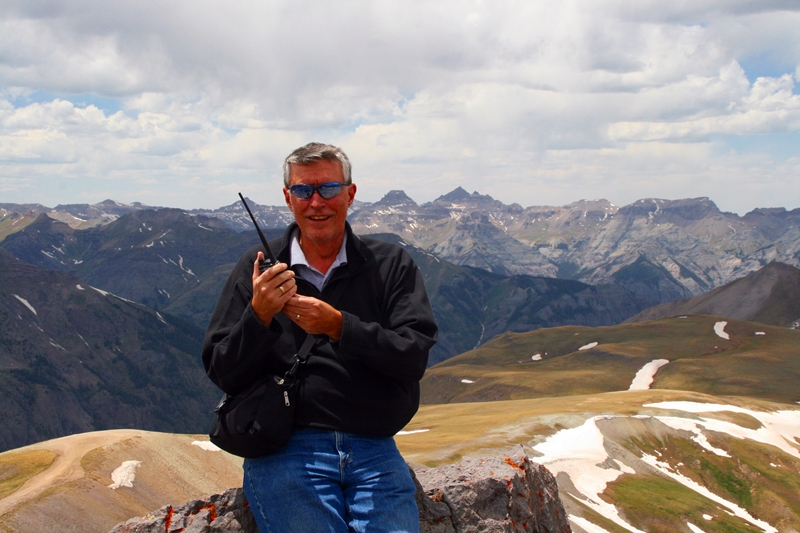 Hmmm, I said to myself, Engineer Mountain is a valid peak (W0/SJ-011, 12968 feet elevation) for a Summits On the Air (SOTA) activation. The only portable radio I had with me was a Yaesu VX-8GR with the stock rubber duck antenna. Not a great SOTA station. But if I could whistle up 4 contacts on 2M FM simplex, I would have a legitimate activation. We had already decided to climb to the summit, so any radio activity was just icing on the cake.

So off we went up the mountain. I got to the top and started calling on 146.52 MHz FM. Now it hits me that we are in the middle of a national forest, away from population centers and, to top it off, no one is expecting a SOTA activation here today. This might be a bit of a challenge to make 4 contacts. Then Thomas, KRØNK, answered my CQ. OK, there’s one contact. A little bit later Dave, AKØMR, comes on frequency and gives me a second contact. Both of these guys were in Grand Junction, CO, which is about 100 miles from Engineer Mountain. Not bad for a peanut-whistle HT using a standard rubber duck antenna.

I needed two more contacts. I tuned around for a repeater in the area and came across the 147.27 MHz machine which turned out to be a stones throw away from my location. It requires a CTCSS tone, so I fumbled around until I figured that out. No, I did not have a repeater directory with me…that was safely stored in the Jeep at the bottom of the mountain. I gave a quick call with my location and Ben WB5ITS came back to me. We QSY’d over to 146.52 to make my third contact.  Anticipating a rough go of it, I asked my wife Joyce K0JJW to descend off the peak while I remained at the top, so she could be my fourth contact. (SOTA rules do not allow contacts between parties on the same peak.)

Somewhere along the way, I reach for a piece of paper to log the contacts, only to find that I did not have a writing utensil with me. Duh. I would have to remember the times and callsigns of the contacts and write them down later.

This is where I could claim that incredible skill, flexibility and a little luck ruled the day. I think a more appropriate analysis is to concede that a complete lack of planning and preparedness produced a marginal result.

What can we learn from this?

Beyond doing a SOTA activation, some of these items could be important if an emergency should occur. It runs out there was no mobile phone coverage in the area. I used to be pretty vigilant about taking an HT with spare batteries and extended antenna along on hikes but have gotten sloppy lately. See Rescue on Uncompahgre Peak, which describes an incident years ago when my radio turned out to be very useful during an emergency.

In the end, I did complete my first SOTA activation, so I can be happy about that. And it gave me the opportunity to relearn a few things about planning and being prepared.

One Response to “How Not to Do a SOTA Activation”