I have been listening when time permits to see whether I can hear – and perhaps even work through – amateur satellites with my attic antennas. Today I caught a couple of passes of Amsat Oscar 7 operating in Mode B. 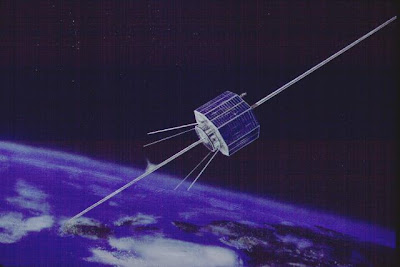 Oscar 7 is the first and only satellite I have ever worked through. It was launched in 1974 and I used it during the summer of 1975 when I was home from university. In those days I used Oscar 7’s Mode A (2m up, 10m down) running 50W from an Icom IC201 with an amplifier to a 5 element Jaybeam and receiving using some kind of wire antenna and a Yaesu FRG-7 receiver.

Oscar 7 is more than 35 years old and the fact that it can be used in 2010 is interesting. The satellite failed in 1981 after all the batteries failed short-circuit and that was the last anyone expected to hear of it. But in 2002 its beacon signal was heard once again after one of the batteries went open-circuit allowing the full power from the satellite’s solar panels to be used to run the transponders. Jan King, W3GEY, who built Oscar 7 in his garage all those years ago, wrote about his feelings on hearing his ‘baby’ again – it was clearly an emotional experience.

The satellite now comes on when it is in sunlight and goes off when it is in eclipse. It is pot luck which of its modes it uses when it comes on, but it mostly appears to be Mode B, the downlink of which can be heard on 145.950MHz USB plus or minus 20kHz. You can receive it quite well using a good 2m vertical – in fact I hear it better on my Slim Jim than I do on the SuperMoxon due to the fact that the latter is very narrow band and tuned to the low end of the 2m band.

You would hear the Mode A downlink on 29.450MHz plus or minus 50KHz. (Both transponders are linear and can support multiple contacts at the same time within the bandwidth, unlike an FM repeater.)

I am finding it difficult to find out which of the many amateur satellites now in orbit are usable for communication and when they are actually available. Many of the websites giving information about how to use satellites are well out of date and give details of satellites that are no longer operational. To add to the confusion some sites use names like “Hamsat” or “Echo” while others use the Oscar designation. So you may find the links below useful if you would like to try listening for Oscar 7.

N2YO has an excellent site for all satellite enthusiasts which provides real time Oscar 7 satellite tracking and allows you to generate predictions for future passes. It’s worth logging in to the site so it can remember your location co-ordinates. You should also tick the box “Check to show ALL passes (visible and not visible)” – confusingly this refers to when the satellite is visible to the naked eye, not when it is above the radio horizon.

The Oscar Satellite Status Page lets people enter reports of satellites heard so you can see which ones are operational and get an idea of which mode Oscar 7 is operating in at the moment. Finally Planet Emily has a lot of information about Oscar 7 including a log where people can record contacts made through this antique piece of space hardware.