I came a little closer to my objective of trying to make a DX contact using only a hand-held radio this afternoon. After dropping Olga off in town for a hair appointment I went up to my usual haunt Watch Hill accompanied my my 2m and 10m hand-helds. I had just stopped on the top when I heard Geoff G4WHA/P calling CQ WOTA from Kidsty Pike on the GP300 which was on my belt. He was a bit noisy as the radio only had the rubber duck on it so I foolishly decided to swap it for the 5/8 telescopic before calling him. Unfortunately in the minute or so it took to swap over the antennas I lost him and didn’t hear him call again. 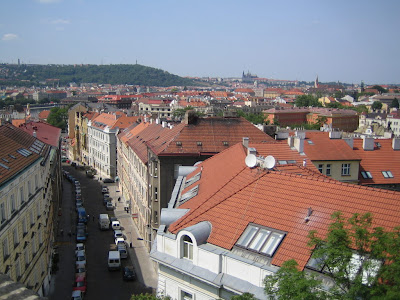 Colin 2E0XSD called me and we had a brief chat, then I made several other calls hoping to catch Geoff or anyone else who happened to be listening. After about five minutes Colin called again to say that he was hearing activity on 10m FM. I got out the Intek with the 4 foot whip and started listening around. I did hear some activity, including what sounded like a French station down in the noise on 29.600 who was not clearing the FM calling channel. I also heard what sounded like Russian on 29.620.

After numerous calls on 29.600 I heard a CQ from OK1AQW near Prague in the Czech Republic, loud and clear. I called him but he replied that I was too weak to copy. A couple of minutes later I started calling again and OK1AQW came back to me with my full callsign! I replied “OK1AQW this is G4ILO/P you are 55 in IO84 QSL?” but got no response from him. I repeated his report several times but heard nothing. I don’t know if a full 4W would have made a difference, but a couple of days ago I adjusted the full power level of the H-520 back to 2.5W to try to mitigate the problem of high current draw when the SWR is less than perfect. So that was a gotaway, unfortunately.

I didn’t hear any more DX on 10m, but I did have a QSO with Roger G0MWE from Dearham who was using a new FT-897D and pleased to hear some activity on 10m. Roger suggested I should use a better antenna which would certainly be possible to erect up there but that would defeat the object of using the hand-held. But I’m sure with perseverance I will eventually achieve my objective.

One Response to “Heard in Prague”