22 September 2015 | by Andrew MØNRD  |  Share |  Tweet |  Leave a Comment (0)
Not long now! Just three days left till the National Hamfest and hopefully the launch of my second high altitude balloon.

Balloon, parachute and helium have all been purchased and payloads have under gone final testing and have been put to one side ready for the flight which should hopefully be around 12pm on Friday 25th September.

They will transmit using the UKHAS telemetry protocol and can be tracked on tracker.habhub.org for information on how to receive and upload data to the tracking system visit the UKHAS wiki some information and useful links have been collated on the AMSAT-UK website

I was hoping to also transmit using the LoRa system, using the callsign PERKY. The transmitter had been successfully tested but a last minute gremlin has struck and it stopped working this weekend, I have been unable to locate the fault and suspect it is the actual module and with time being short have all but given up getting it working. If I do get it working it will be on 434.450MHz in Mode 1


I have already detailed the PIGLET payload in an earlier post. The PINKY/PERKY payload is constructed on strip board and was originally meant to to be a prototype, hence the rubbish layout. I had planned to build a better laid out version but the tight time scale, stresses and demands of work, commitments with the radio club not to mention nursing the wife as she recovers from a major operation scuppered that plan. Being pragmatic I decided it didn't need to be work of art to work! I have secured all the connections with hot glue and it has been drop tested several times. 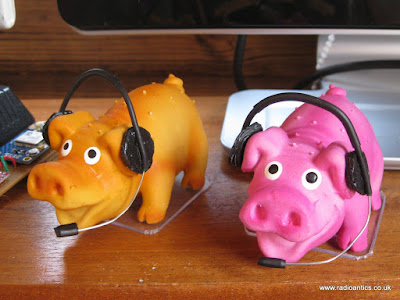 "Pinky" pig will be the passenger on the day, donning his fetching headset. Getting him in the right position for the camera was tricky. 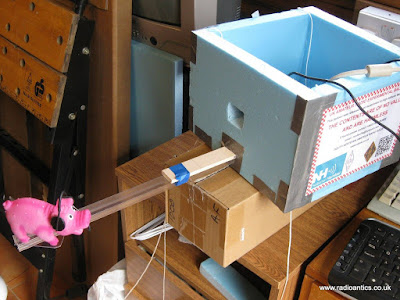 I am still waiting for the CAA approval, should hopefully get it soon. I have put in a request for both days of the Hamfest just in case, the latest prediction at predict.habhub.org shows if I get the fill right I might just escape a watery landing on Friday, however Saturday looks more promising at the moment - also the forecast for Friday at the moment also has strong gusty surface winds, which could make the launch problematic. I am still planning for Friday since conditions and predictions do change.


I and other members of South Kesteven ARS will be in attendance with a tracker station on the day, so please introduce yourself and perhaps join the club?

Please don't mention anything to do with other pigs in the news..
Andrew Garratt, MØNRD, is a regular contributor to AmateurRadio.com and writes from East Midlands, England. Contact him at [email protected].