22 February 2014 | by Mike AD5A  |  Share |  Tweet |  Leave a Comment (0)
I have SOTA fever really bad. Activating summits seems to continually occupy my thinking these days. My goal, 1,000 activator points at which time I will buy piece of glass with my call and a picture of a goat on it. Doesn't everyone think about that?

To feed my addiction I made a trip to my QTH in Santa Fe, NM. I arrived there on my birthday February 13th. I had been planning this trip for more than a month and was worried about how the weather would be since the long weekend in Santa Fe would be my only chance to activate summits for a while. The weather forecast was for highs in '60's. Perfect.

. I had a different strategy for this trip, since none of the hikes would be more than a mile one way, I carried my FT-817 and an Elecraft T-1 tuner with plans to get on the WARC bands since the ARRL DX-CW contest would be going on the weekend. The FT-817 is fresh from getting modified with the W4RT on-board filter for both SSB and CW and the DSP as well.

So on Friday the 14th, I met up with Fred, KT5X aka WS0TA. We had two summits on the agenda, Peak 7119, W5N/PW-037 and Glorieta Mesa, W5N/PW-032. The day was windy, but the temps were comfortable. While the climbs were short, they were very steep to both summits. There were probably easier ways up, but what the heck, we were looking for adventure.

Propagation was good on the first summit, Peak 7119,  I worked 5 EU stations, OH9XX, DJ5AV, EA2LU, ON4LI and G4OBK. My antenna was an LNR Trail Friendly 40-20-10 EFHW strung over as high a limb as my pole could reach and then to my carbon fiber fishing pole and down to the rig, an inverted L configuration. the antenna tuned great on the WARC bands. Fred and I employed a strategy that maximized available bands. I started on 12m and worked my way down to 20m while Fred started on 20m and move down to 30m and 40m. So as a team we made the summit available in several bands. I made 20 QSO's; 11 on 12m, 3 on 17m, 5 on 20m and 1 on 30m. I did have a couple of S2S's, one with N6JZT and another with N7CW, both with huge signals. Thanks guys.

Peak 8409 is a relatively easy summit, with only about a 75 vertical feet ascent required to get into the activation zone. I used an AlexLoop on this summit as I wanted to get set up quickly. Propagation must have been in the process of warming up. I only made 9 QSO's 8 on 12 meters and 1 on 30 meters. The stations I heard were loud, but there weren't many of them. I never was spotted on RBN. I tried to self spot on SMS but put a slant bar in the summit reference which is the incorrect format. I didn't figure this out until later. So,  I had to pack up to make the scheduled time on Peak 9420, so Jeff and I made our way down the hill to the car and were on the way to the next summit.

Peak 9420 is an excellent SOTA Summit. It climbs 800 feet over a distance of about one mile, which is relatively steep, but the hike is only a mile  to the summit and it has a nice trail with lots of switchbacks to take some of the sting out of the hill. I'm in relatively good shape and it took me 23 minutes to get to the top. The weather was cooler and the wind was blowing at a stiff clip. There was some snow on the ground at the top, but not too much. It was too windy right on top, so I moved down a little to get out of the wind. I used my FT-817 with the Elecraft T1 tuner and the EFHW. I netted 31 QSO's , 11 on 12m,  9 on 20m and 11 30m. During my run on 30m, I heard a faint but copiable signal and a slow but sure fist calling. It is K7NIT, Rachel, calling for an S2S, followed soon thereafter by K7ATN. Thanks guys. Another fun thing happened, after my first run on 12 meters I didn't work either W4DOW or AE4FZ both of which are well up the standings on the 12 meter challenge. I worked AE4FZ on 20m so I knew he was out there. So after the pile-ups died down I went back to 12m and threw out the bait. Like two big trout after a fly, very quickly after calling CQ I worked both W4DOW and AE4FZ. I knew then it was okay to QRT. 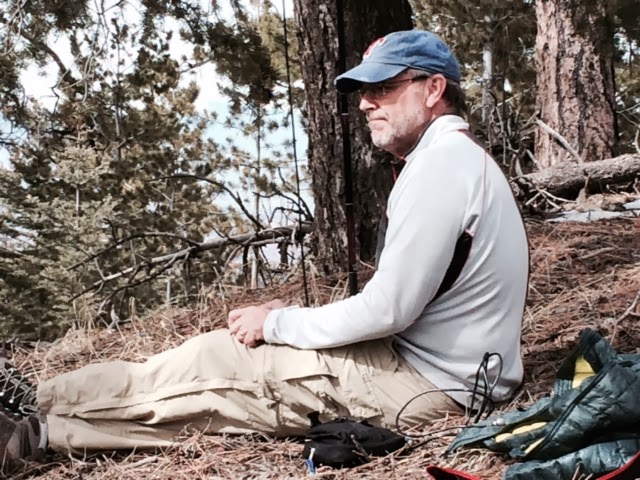 Day 3 would require a little driving. I was headed to Sandia Crest, W5N/SI-001. Sandi Crest is dominant peak in Albuquerque, NM. My XYL accompanied me on this trip. It is a drive up to the summit which sits at ~10,600 feet. We also wanted make the drive on HWY 14 out of Santa Fe which is a beautiful drive. In addition to the views it goes through Madrid which is where much of the Tim Allen film, "Wild Hogs" was filmed. Its a very cool little town. We didn't have time to stop, but will make a special trip next time.

At the summit it was cold. In the 30's and very windy. I would have to find a spot out of the wind. Because of the cold my wife decided to sit this one out, in the gift shop. Now this was probably a mistake on my part, because when I was done with the activation she had found several nice things to put in our house. Another way of looking at this is that it's a small price to pay for a SOTA pass:-).

I hiked about a quarter of a mile south of the summit structures and found a place where I could sit on a log, out of the snow, be sheltered from the wind but yet give my antenna a good look at the world. The picture below is what I found. The log in the foreground was where I sat and the Alexloop, with the tripod anchored in the snow, has a nice look over the snow bank. I again used the 817. 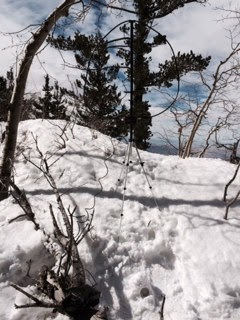 Operating Position on Sandia Peak
Propagation was very good as I had 35 QSO's. I surprisingly found an open spot on 20m despite the contest that was going on and started there. I made 23 QSO's on 20 meters and then move to 12m, where I had 7 QSO's including contacts with DJ5AV and EA2LU. I finished out on 30m with 5 more contacts. When the CQ's produced no more results I packed up and headed back to the warm gift shop and my awaiting bill. But no worries, it was a fun trip. I was happy, my wife was happy and we had a nice day in the mountains.
This was a very nice SOTA trip. For a winter weekend in New Mexico, the weather was exceptional. I activated 5 Summits, made 120 QSO's and netted 55 Activator points. I'm just a little closer to that piece of glass.﻿
Mike Crownover, AD5A, is a regular contributor to AmateurRadio.com and writes from Texas, USA. Contact him at [email protected].