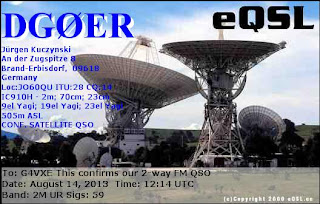 The experiments with the UV-5R and the Nagoya NA-771 were encouraging for listening, but being a bit impatient I thought I could use the Elk yagi to get a bit of gain to make some QSOs.

What was needed was an adapter from the UV-5R (SMA-F) to the Elk – I’d used a PL259 to connect to the FT817. I decided I would use a pigtail lead rather than a straight adapter, to avoid putting undue strain on the antenna connector. Various US outlets listed the leads on Amazon, but wouldn’t ship to the UK. I was pleased to find that Sinotel Ltd had stock in the UK, so I placed an order.

The adapter arrived this morning and I was able to get set up for an SO-50 pass. It was raining hard – so I opened the patio door and waved the antenna outside. Signals were good. If anything, I felt the UV-5R might have been more sensitive at 436.800MHz than the FT817 – just a guess. I was able to have a tentative QSO with Simon G6AHX, an old friend from Cheltenham days. For some reason the satellite dropped out with me, so the contact was a bit stilted, but think we got there in the end.

So the UV-5R and Elk looks like a very viable portable FM SAT setup. At over £100, though, the Elk is a lot more expensive than the UV-5R! It works well, but will probably put off the casual experimenter. Perhaps a homebrew tape measure antenna might be an option?

[Update] The following SO-50 pass worked out even better. I was able to work G6AHX again, Walt ON5NY and finally Juergen DG0ER. Once again, I felt I had slightly better copy on the UV-5R than I’d previously had on the FT817. I’ve done no measurements, but this could be – given that at 436MHz, the FT817 is at the high end of its’ coverage, where as the UV-5R doesn’t need to work on 1.8Mhz as well.
Simon did comment that the deviation was lower on the UV-5R, so I will probably need to remember to bellow into the microphone a bit more. Sorry to the neighbours…
Tim Kirby, G4VXE, is a regular contributor to AmateurRadio.com and writes from Oxfordshire, England. Contact him at [email protected].