27 September 2014 | by Tim G4VXE  |  Share |  Tweet |  Leave a Comment (0)
After my post mentioning the release of the new Noble 70MHz rig, I very quickly had an email from Rob PE9PE. Rob and I operated together on the FSDXA trip to the Comoros, D68C. Rob is involved with Noble Radio in Europe and offered me the chance to take a look at one of the first NR4SC radios. Of course, I said yes!
The rig arrived yesterday and of course, I wasted no time in unpacking it. 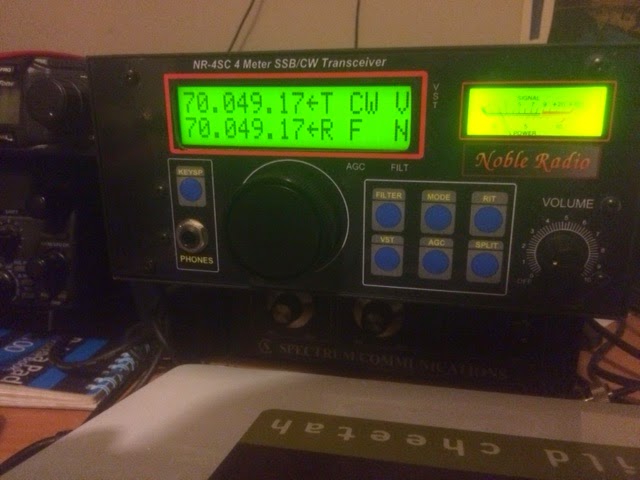 The first impression is of a solidly built radio. It’s quite chunky. When I posted a picture on Twitter, someone used the U word! But, I think the U word we should use is Utilitarian. It’s functional and reminds me of some of the Tentec styling.

Powering it up – I love the clear, big display of the frequency readout. Initially, I found the volume control a bit noisy. I mentioned this to Rob PE9PE and he said that some of the rigs did this, but a few quick rotations of the volume control would cure it. Sure enough it did. I hooked the rig up to my 70MHz vertical, which is what I normally use for working Es and the occasional tropo contact. Not ideal, but enough to make some contacts.

First tests were to listen to the GB3RAL 70MHz beacon. It was the same sort of signal strength that I expect with the Spectrum Transverter and HF rig, but interestingly, I felt the receiver was a lot quieter, which was nice.

The rig has a built in Iambic keyer for CW. I wanted to try that out as it seemed as if CW would probably be my best chance of making some contacts! The keyer socket on the rig is for a 3.5mm jack rather than a 1/4 inch jack – slightly pesty as all my other rigs have the larger size and I couldn’t immediately find an adapter. However, the Palm Paddle which I use with my FT-817 had the right size connector, so I decided to use that and plugged in and changed the mode to CW.

I discovered that the keyer jack is expected to have the dash on the tip, rather than the usual dot! Simple enough to resolve – I turned the paddle upside down and all then falls into place. The keyer is quite nice to use although I made the occasional mistake – which is just a question of getting used to the dot/dash memory.

The rig can also be supplied with a fist microphone and Rob had kindly included one of these with the package. Listening to the transmitted audio and the CW on a monitor receiver was fine and on a quick listen I didn’t hear anything I didn’t like the sound of.

Early this evening, Pete 2E0SQL kindly tried listening for me, although we didn’t manage a QSO – probably owing to our cross-polarised antennas. However, I did hear John M0UKD calling CQ on 70.200 from Hornchurch in Essex and was very pleased to be able to have a quick QSO with him. John was running 25W to a vertical compared to my 10W, so I was pleased to work him.

Tomorrow afternoon brings the Practical Wireless 70MHz contest, so I hope to make a few more contacts then.

In the meantime, the first impressions are positive. A rig which is simple to use, has a nice quiet receiver – and here’s the real plus – a rig with which you can monitor 70MHz without tying up an HF rig – no transverter needed.

I’m looking forward to playing some more, hopefully with some better antennas too and will post my further thoughts.