First impressions of the Funcube Dongle Pro Plus 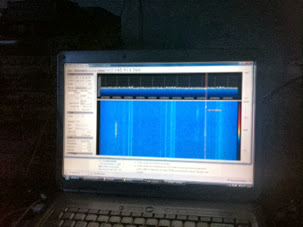 Santa was kind enough to bring me a Funcube Dongle Pro Plus this year. As regular readers will know, I have enjoyed using the RTLSDR dongles for some low cost SDR work.

Reading around before Christmas, I thought that the FCD+ could be very useful – partly for satellite work as a simple receiver and for general listening.

Christmas Day was busy and enjoyable and it was this morning before I could have a look at getting it going. Installation really couldn’t have been simpler – just a case of plugging in and letting Windows find and install the drivers.

I already had a copy of SDRSharp on my machine and ran that up and changed the input device to be the Funcube Dongle Pro Plus. By default, the configuration in SDRSharp has a frequency correction of 120ppm, which throws frequency accuracy a bit! Simply remove this and restart SDRSharp and accuracy will be bang on.

I fiddled around a little and had a couple of lockup issues – so I decided to download and install the latest SDRSharp nightly build. This seemed to cure the lockup problems – or at least, in several hours of playing around, it hasn’t happened again, despite the laptop that it is running on, not being particularly recent.

Experience so far is very positive indeed. I am amazed at the sensitivity of the dongle. It is on a par with the other receivers I have here, if not slightly better. I was hearing GB3VHF very easily on the FCD+ plugged into the V2000 vertical. So far I have tried it on 50, 60, 70, 144 and 432MHz with good success. I have listened on 1296.200MHz, but nothing so far!

I have listened to a couple of passes of the VO-52 satellite using nothing more than the V2000 verical and results have been great, hearing a number of stations very easily; LX2LA, IK8ZLD, SP9TTI, 9A2UV, GM4CFS (all from memory). So it maybe that a viable garden portable setup will be the PC and dongle for the receive side and the FT817 for transmit. Maybe I will wait for the weather to get a bit better before I try that!

I have also used the VB-Cable software (rather like Virtual Audio Cable, but free) to feed data out of SDRSharp and into UZ7HO Soundcard Modem (which was reasonably successful although I didn’t feel I was decoding quite all the packets that I should have done) and also into WSJT.

Using WSJT, I decoded the JT65B from GB3VHF, received off the V2000 vertical. This was particularly impressive, as the signals were not huge at the time. I will have to try something weaker. Doesn’t GB3NGI transmit JT65B as well?

All in all, I am very impressed indeed. The FCD Pro+ is a wonderful addition to my shack – I can see it will be very much used.

One Response to “First impressions of the Funcube Dongle Pro Plus”