30 June 2015 | by Larry W2LJ  |  Share |  Tweet |  Leave a Comment (3)
Most of the South Plainfield Amateur Radio Club showed up at Spring Lake Park at 10:00 AM or a little beforehand. There was enough pre-Field Day organization that we all pretty much knew what had to be done and what our roles were. Set up went well:

First - set up the antennas, and organize the tent - our "home" for the next 24+ hours.
South Plainfield Amateur Radio Club - NJ2SP - 3A - NNJ
Battery - all power provided was from solar charged batteries. No generators were used or fossil fuels burned to generate RF for the weekend. 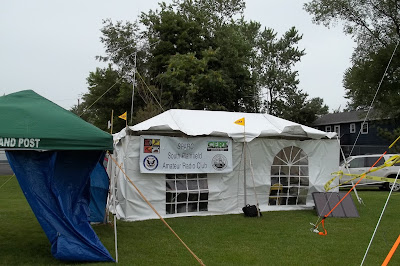 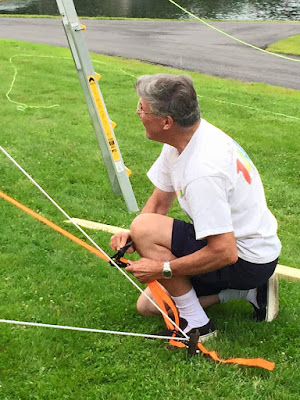 Ron N2LCZ helping with the "tower" guys.
In addition to helping up with setting up antennas, Ron devised and built a network so that we could link the logging computers together. No small feat under the conditions we were operating under. N2LCZ is truly SPARC's resident Computer Expert (in addition to his yeoman's work as Club Secretary). 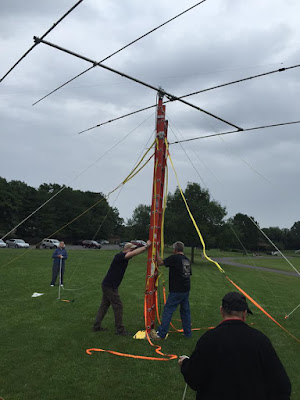 Notice the ominous looking sky - it was a harbinger of what was to come. 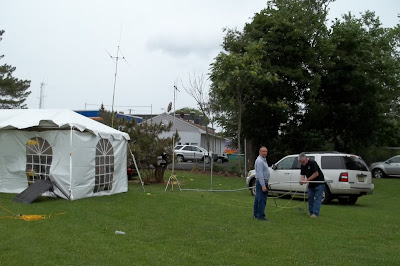 Dave KD2SFI (black t-shirt) putting together antennas for GOTA and VHF/UHF.
Dave Hackett KD2FSI, was our Field Day Committee Chairman this year. Dave was the "gasoline" in our Field Day "engine". Dave may be recently licensed, but he's already built up a good knowledge of what will work and what won't. He's got an enthusiasm for Amateur Radio and Field Day that is positively infectious. Dave is the kind of guy that makes you can't wait for the next operating event. If I was putting together a DXpedition to a very rare and exotic locale, Dave would be #1 on my short list of Hams who absolutely had to be part of the crew. 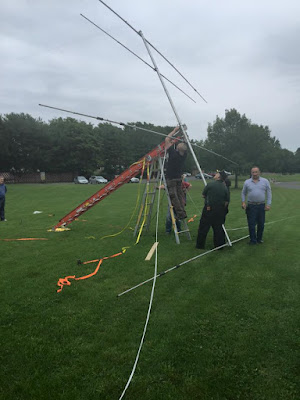 We had the tri-band beam set up on an extension ladder tower affair designed and constructed by our own Philip DeFort, KD2HPG.  Phil is a graduate of our Technician class from last Autumn. In addition to his mechanical contributions, he also added to our score by making some of his first on-the-air contacts as a Ham. He brought along his teen-aged son (also named Philip) who is now serious about getting his own ticket. 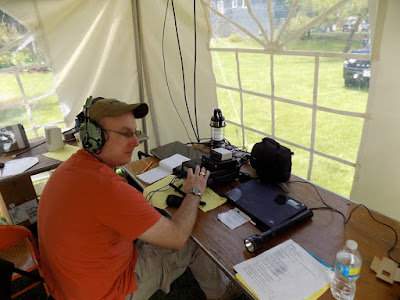 Here's a photo of Phil making some of his first contacts.
In addition to the tri-band beam, we brought back the EARCHI for another year. We had a ten meter dipole for GOTA and some VHF/UHF antennas built by Dave KD2DSI. We also had a W3EDP antenna up, which was built for the SSB station in anticipation that 20 Meters would probably close for the evening at some point.
We got through set up high and dry and were on the air promptly for the 2:00 PM EDT Field Day start. And that's when things started to go wrong. First, the winds kicked in and then it started raining buckets. It ended up being the soggiest Field Day that I can remember. In addition, it was pretty chilly all day. I was wearing a t-shirt with a sweat shirt on top, and resorted to adding a jacket as temperatures fell and humidity increased to 100%.  There were several times during the night when some of us went to our cars and just sat for about a half hour or so with the heaters on in order to get warm and dry out for a little bit.
Soon after the start, it became apparent that something was drastically wrong with the beam. The KX3 took a long time to find a match and even when it did, the antenna was not performing as expected. My Autek antenna analyzer showed the driven element was somehow resonant way out of band, so we switched the SSB transceiver over to the W3EDP and limped along for the weekend with that. Unfortunately, the W3EDP didn't perform much better, as I think there may have been a balun problem there. We would have been better off using Marv K2VHW's G5RV as we did last year, but it was already raining buckets and I wasn't about to risk pneumonia just to get another antenna up into the trees.
But even with the antenna mishaps, there were bright spots. Marc Sullivan W4MPS, who is a good QRP friend from North Carolina was in town to visit his daughter. He came by the Field Day site with his wife for a quick visit to say "Hello" before heading to his daughter's house. He came back by himself shortly after the starting gun sounded for a longer visit. And Marc's presence was truly a God-send because right around that time, the digital station was having some RFI problems which was causing their laptop to freeze. They needed some clamp on ferrites, which I had at home. Marc volunteered to keep our CW station busy while I was off fetching the ferrites and doing some other things. 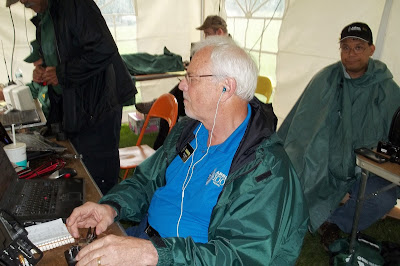 Thank you,  Marc W4MPS for helping out!
In the photo of Marc W4MPS, the guy in background in the rain poncho is SPARC's own Mario KD2HPF. Undoubtedly due to his experience in Scouting, Mario was about the only one with proper foresight to come properly attired for the weekend.  Mario was also a graduate of our last Technician class held in Autumn, along with Phil KD2HPG. Mario was active in the Rookie Roundup and he was active again for Field Day. In addition to being a valuable part of the set up and tear down teams, Mario put in a lot of chair time at the 6 Meter station. He was our mainstay in keeping an eye open for any openings that may have occurred on that band. Mario had a Go Pro with him, and I think there's a video of him calling CQ on 6 Meters kicking around somewhere on the Web.
It was a long chilly night, but it was made bearable by visits from friends from our two neighboring clubs, the Electronic Testing Society of NJ, and the Raritan Valley Radio Club. So many showed up, that it's hard to remember them all and I beg pardon if I forget to mention any - but special thanks to:
Pete KD2ARB for the pizzas, Dave W2OIL and Dan KC2YRC for the home made brownies, the hot coffee and the help with tear down at the end. Marty WB2BEW donated the use of his pop up canopy, kept us company when it got lonely, and was just an all around morale boost. Marty is good people and it was good to have him with us. Same goes for Craig AC2FE, who came in the evening to keep us company for a while.  And Hank N2MU who was not only a friendly visitor, but also a critical thinker who helped us iron out some technical glitches. Again, if I left out any K2ETS or W2QW members, or any other visitors who showed up, I apologize, but my brain is still a little addled from the weekend.
On Sunday, around Noon, Mayor Matt Anesh and councilman Rob Bengivenga showed up at the site. We gave them the nickel tour and explained the operation and its purpose to them. The mayor was by last year, so he was familiar with Field Day, but Councilman Bengivenga was not. 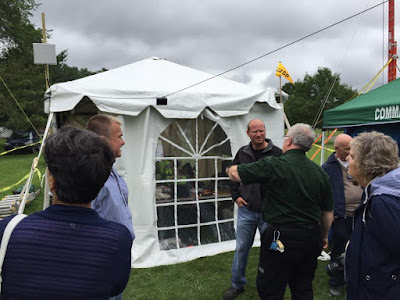 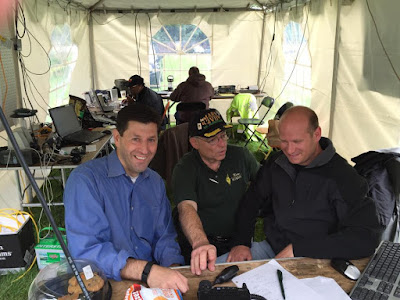 Marv K2VHW, SPARC President, explaining Field Day and the equipment with the Mayor and Councilman.
And wouldn't you know it, when the dignitaries appeared, the skies brightened up and the sun came out! I was joking around with Mayor Anesh that had we known that he was bringing better weather with him, we would have invited him over on Saturday! 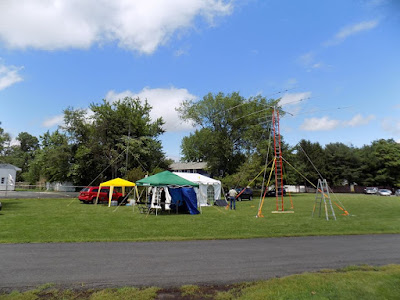 And once again, South Plainfield's Finest parked one of their cruisers by our tent to serve as a little bit of an extra added deterrent against any possible mischief during our overnight stay. Police Chief Parker has been very accommodating towards SPARC, and as the SPPD takes on the role of OEM, we look forward to working with him. I didn't notice it, but fellow SPARC member, Tim Halloran AB2ZK pointed out to me the cruiser's official designation number. 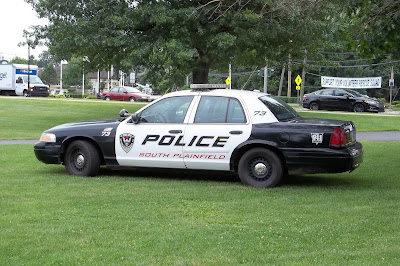 Car 73 - how appropriate!
So even though it was cold, wet and miserable, and we had antenna problems, and band conditions for Field Day weren't as good as they were in 2014, I think it's safe to say we all had a blast, and that SPARC is eagerly looking forward to Field Day 2016. We're going to remedy our problems and we'll be back, ready to once again take on whatever Mother Nature and Old Man Murphy dish out to us. 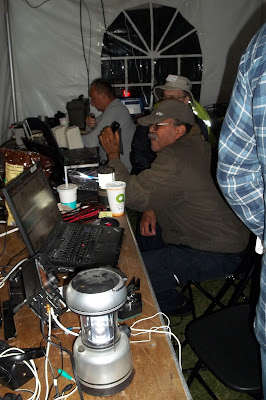 Drew Moore W2OU is our AC Log expert, fellow CERT member from Piscataway and a very valued member of SPARC.  Drew is a "Ham's Ham" and is a fun guy to be around and to just sit around and shoot the breeze with. Drew is also an ARRL official, so it's nice to have a little bit of the League with us all the time. 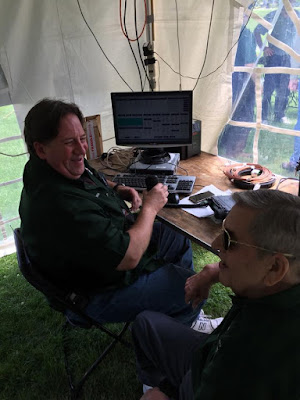 Tim AB2ZK and John AB2VE sharing a laugh during a lighter moment.

Tim AB2ZK was our "food guy" this year. Tim ran out Saturday night at 10:30 PM in the chill and pouring rain to bring us some hot sandwiches. He's always got a joke or quip up his sleeve exactly when one is needed. He was in South Plainfield's first CERT class and was a graduate of our first Technician licensing class back in 1995.  John AB2VE helped me set up the W3EDP and the EARCHI antenna. When I was getting a bit frustrated with the way the wind was blowing around the antenna lines I was launching, John kept me focused and on target. John is a veteran member of the South Plainfield Rescue Squad and is a very good friend to have. 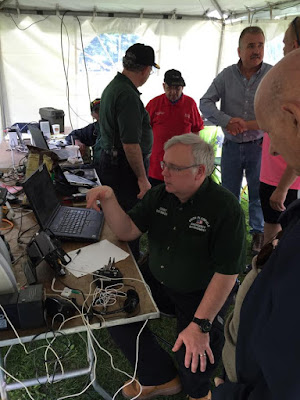 W2LJ explaining the KX3 and the CW station to some visitors.
Lastly, two more SPARC members that I want to mention. Wayne Grennier N2LRE is our Vice-President. He's also our publicity guru who gets and keeps SPARC in the town's local publications. There are so many times that friends come up and say, "Hey Lar, I saw your picture in the Observer about that Amateur Radio thing you're involved with." Word of SPARC gets out because of Wayne. I wanted to snap a Field Day photo of him, but he was too busy flitting around with his camera, getting photos of the rest of us!
And our President, Marv K2VHW. Marv saw the need for a new Amateur Radio club in South Plainfield and did something about it. He's our navigator as we sail through uncharted waters. He has a good sense for what's good for the club and he's not afraid to try new things or to listen to a new opinion. SPARC is what it is because of Marv's leadership. We will forever be indebted to him. He keeps us engaged and active - and if a club is going to succeed, that's exactly what you need.﻿
72 de Larry W2LJ
QRP - When you care to send the very least!
Larry Makoski, W2LJ, is a regular contributor to AmateurRadio.com and writes from New Jersey, USA. Contact him at [email protected].