Ever have things go bonkers just at the wrong time? 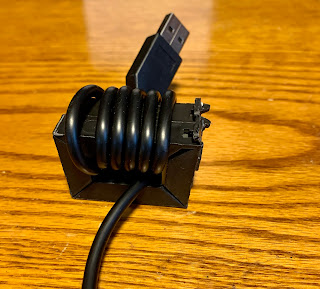 As I have blogged in the past I have been taking part in the CWops mini weekly contests. It gives me some nice practice for an hour. Things have been going very well using N1MM+ contest software. Until my last CWops contest. N1MM+ uses macros to send your call and the contest exchange, you just push the key for the designated macro and you are off to the races. Well up until my last contest this was how it was working....then not so much.
I pressed the key to send my exchange, the Icom 7610 went into transmit and N1MM+ sent "Mike NB" (my name and province) BUT this time the radio got locked in a transmit loop and sent the exchange over and over. The only way to stop it was to turn the power off on the radio. I was not sure if it was a software glitch with N1MM or what. I continued and the issue did not come back...well for a little while that is. This time I sent my call sign and it was locked in a transmit loop!
When these anomalies happen I always try to look back at what I had changed since the last time it was working just fine. The first thing that came to mind was just before the contest I updated N1MM, so I loaded a previous version. (always keep them in a desktop folder for the just in case moment) I then went back into the contest and within short time it happened again with a transmit loop.
There were no other changes that were made so instead of using the macros in N1MM I sent using my Key....old-style contesting. Doing this I had no issues at all so then I used my wireless keyboard. There was no issues using that so next, I used my old USB keyboard. and no issues with that.
Things are narrowing down to my Lenovo pro 2 keyboard as the issue. Since the issue only happens during transmit I am guessing it's an RF issue with the keyboard. I had some spare rf chokes and I placed them at the USB connector end of the keyboard and that did the trick. Funny thing I had been using this keyboard for over 2 weeks in contests without issue. But that is how RF works and I am glad that I am still able to use my Lenovo keyboard and have no more issues.