The weather forecast suggests that the fine spell we have enjoyed for the last few days – which has caused the G4ILO shorts to be brought out of the wardrobe unusually early – is going to end soon. So I thought I would try an activation this morning of the small summit of Dodd, LDW-174 for Wainwrights On The Air. Being a tightwad, I didn’t want to pay the Forestry Commission’s exorbitant charges to park at the visitor centre so I parked off the road at a spot about a mile north of the official car park. I’ll happily walk an extra two miles to save £6.50! 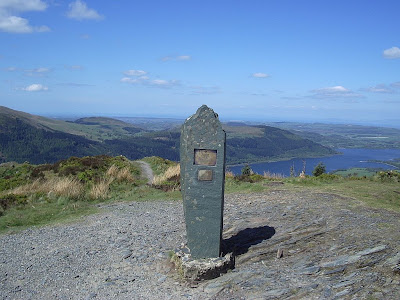 I was afraid this well-known parking spot would be full but in fact there were only two other cars there, a silver Nissan and an old BMW that was very dusty and looked suspiciously as if it might have been there a while. I set off along the path and had hardly walked a few paces when I saw some car keys in the undergrowth beside the path. “I bet they are BMW keys” I thought to myself as I picked them up and sure enough they were.

Now I had a dilemma. Perhaps someone had dropped their keys and would be coming back to look for them, so I should leave them where they were. It was just a gut instinct that made me suspect the BMW had been stolen and some thief had left it in this quiet spot and thrown away the keys before switching to another car. If it wasn’t a stolen car, surely it soon would be if I left the keys so close to the vehicle itself. So I decided to walk to the visitor centre and hand the keys in, explain what had happened and suggest they called the police to investigate. 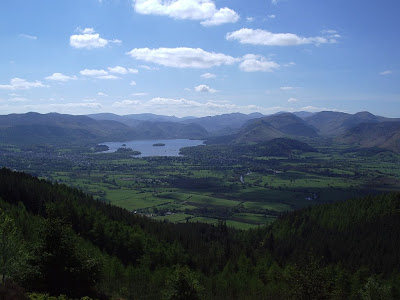 As I reached the higher altitudes it was clear that the stiff cold wind that has been a feature of the entire weekend and made conditions a lot less pleasant than the photos suggest was still with us. The WOTA Pole was still broken (and probably won’t be repaired) so in its place I was using my new rucksack mounted telescopic 5/8 vertical. This is the old telescopic 5/8 BNC antenna with a new more robust whip fitted to the spring/loading coil. Because the weight of the whip makes the spring bend over it is encased in a piece of plastic electrical conduit which is Araldited to the base of the telescopic whip. This fits into the base section of conduit using one of the famous fragile jointing pieces. A female BNC plugs into the BNC base of the antenna, with the coax and a 19in pigtail counterpoise. This gave a perfect 1:1 SWR at 145MHz when tested at home using my antenna analyzer. It fits nicely in the rucksack with the telescopic whip sticking up above my head, the ultimate fashion accessory for the keen WOTAphile.

The radio was the Kenwood TH-D72 stuck on my belt. The headset I first tried on Carrock Fell proved itself once again, both in helping me to hear the other stations in the howling gale and in keeping the wind noise out of my audio. Regular readers can probably detect a trend here. I think the Kenwood is finally coming into its own as my APRS radio of choice.

I called CQ WOTA a couple of times, with no replies! Was this going to be a failed activation? Eventually to my great relief Mark MM1MPB came back. He gave me only a 5 by 5, which I improved to a 5 by 9 by walking a short way to the other side of the summit. I was concerned that perhaps something was wrong with the antenna so I swapped to the Nagoya NA-701 short dual band flexy-whip and Mark gave me only 5 by 3 so the 5/8 seemed to be doing its stuff. Dodd is quite a hemmed-in summit and although I could see across the Solway to Scotland it’s possible that the path to Annan was blocked by the Ullock Pike ridge and the northern flanks of Skiddaw.

A few more calls and I was pleased to be answered by Colin G4UXH in Milnthorpe who had noticed the website spot placed by Mark, and then Steve M0IGG from Walney Island. Both stations were beyond the southern boundary of the Lake District and so at a fair distance. Clearly I was getting out, just not many people were listening. I also worked M6BDV/P on Little Mell Fell for a summit to summit contact, who confused me at first by using the call MW6… his home area being Wales. But that was it. None of the Workington mob or the Penrith crew. I guess everyone was WOTAed out after all the activations over the weekend. 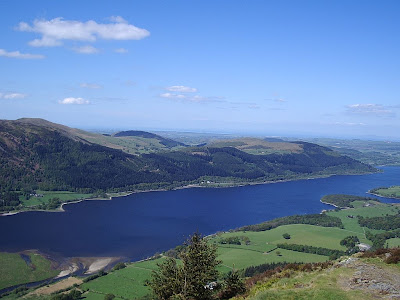 I didn’t even see another person on the summit, which is quite unusual. Not that I minded that at all, in fact I always prefer to have a summit to myself than have hordes of people wondering what I am doing.

The views as always from Dodd on a clear day were stunning. But it was damn cold no thanks to that icy wind, so I was pleased to pack up and head back down to the car again. The BMW had gone by the time I returned. How it came to be there with its keys tossed in the undergrowth will probably forever remain a mystery.