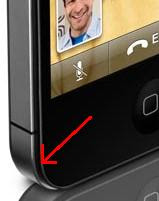 I’ve never been a fan of Apple products. I have always felt that Apple was a brand aimed at fashionistas concerned more with style and the coolness associated with owning a particular product than with practicality. So for example phones were made with non user-replaceable batteries in order to make them very slim.

Now it appears Apple’s engineers have made another slip-up in the name of style. Users of the new iPhone 4 are reporting that they lose the signal whenever they hold the phone. Apparently a section of the stainless steel band that runs around the phone is used as the antenna, and the part that radiates is on the lower left hand side – nicely surrounded by the fleshy palm of your hand if you hold the phone in your left hand.

It seems to be that Apple could do with a radio ham on its design team. Even the newest Foundation licensee – in fact even a CBer – could have told them that antennas are supposed to point upwards.