About two months ago while I was on a business trip, my wife’s computer started to go on the fritz.  Immediately when she told me of the problem I knew what it was as her parents have the same model all-in-one Dell and it experienced the same problem six months ago.  They went through five service calls to get it fixed correctly.  The video display becomes bright and washed out, to the point where most text is unreadable and you can’t adjust the display to make it right.

For a few months I had casually been playing with a Macbook Air at work, mainly for a secondary computer.  I had vowed to family members that my days of supporting Windows for relatives is over due to the release of Windows 8 and my frustration with dealing with many of the same recurring problems of viruses and instability after 20 years of evolution of the product.  I decided to buy my wife an Apple iMac and go into uncharted territory.

We went to the Apple store Saturday morning after I got back from my trip.  We were greeted by a friendly sales guy, Steve.  He introduced himself and started getting to know us, what we do, where we live, and how much experience we had with computers.  The conversation turned to Steve Jobs and we talked about how much of a hand he had in the design of the store, right down to the selection of the floor tile and the front glass.  I usually despise conversations with salespeople at electronics stores, but this was actually quite enjoyable.

After I asked some questions about the models and capabilities, I told him the iMac model we’d like to get.  He made some taps on a little iPhone-like device and about 40 seconds later a girl popped out a hidden door in the back.  The stores are designed much like Mac laptops with hinges hidden so you can’t really tell where the door to the back area is.  She brought a box containing our iMac right where were standing.  I gave the sales guy my credit card and he used the same little device to scan the card.  “Would you like an email receipt, no paper?”  he asks.  “Sure” I reply.   I figure this is probably the end of the transaction and our visit, but he carried the computer box over to a table and stared taking it out.  This area is where customers get aquatinted and assisted with new purchases.  Steve hooked everything up and instructed us on various elements of the user interface and the major applications.  We stayed for awhile getting familiar with the iMac and after we were done, someone boxed up our machine, careful to pack it up just as it came from the factory.  We walked out the door with a box and a bag of accessories and surprisingly, no paperwork.  I’m actually sad to leave as I wanted to stay and play around with the machine more and perhaps buy some more stuff.

A few weeks passed.  My wife is doing fairly well with the iMac.  There are naturally some differences with the user interface when coming from Windows, but for the most part she’s getting through them.  I no longer hear complaints about slowness, locked applications, or how she had to do a periodic reboot again to clean things out.

I switched to a new Lenovo laptop last year after my Dell laptop display went bad.  I reformatted it entirely for Linux.  Linux was working well, and I was running Windows in a virtual machine to handle one contesting application and a few programs for my Kenwood TS-590 that only run on Windows.  The Lenovo was mediocre in my opinion.  The keyboard flexed when typing and the touchpad required way too much force to click, to the point where it fatigued my borderline carpal tunnel syndrome IT professional hands.  I struggled with wireless Linux drivers and USB operation was often an adventure.  I decided to bite the bullet and order a Macbook Pro. 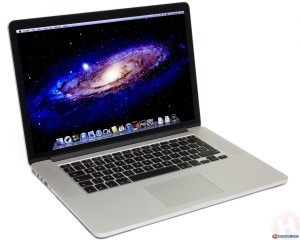 The Macbook arrived about a week later.  The Retina display is amazing, though now when I look at other lower resolution displays I perceive pixels.  Transferring files over was fairly easy and I even copied the Windows virtual machine over from my old Linux box and ran it with no problems.  In full screen mode it’s funny because it runs quite nicely and acts like a native Windows operating system installation.  I later created another virtual machine and installed Linux Mint 15 on it so I could run CQRLog.  So, I have three operating systems in one.

As much as I wanted to blog about how I’ve been using Linux successfully for a year in my shack, I’m really pleased with the Mac and I think I’ve been permanently converted.  The beauty of the Mac operating system, OSX, is that it’s Unix under the hood.  It looks simple on the surface but you can dive down into the complexity if you like.  You can bring up a shell prompt, install packages, create cron jobs, etc., basically most of the stuff you do in Linux.  A lot of the open source software out there compiles for OSX.  I attempted to recompile CQRLog for OSX but was unsuccessful.  I think completing this will require some additional coding in Lazarus Object Pascal to customize a version for OSX, but it’s doable.  All in all I think you get the best of both worlds with a very user friendly interface and a Unix core.

People often complain about the cost of Apple products, especially when comparing Android devices and iPhones, but I think what one really needs to focus on is value, quality, and user experience.  There’s a level of attention to detail with Apple that you just don’t often find in other products, especially when it comes to brown box computer purchases from your local retail outlet or mail order ecommerce vendor.  Of particular interest to radio artisans, the Macbook Pro has one thing you rarely find in laptops these days — an aluminum body.  I’m curious how well the laptop performs in a high RF environment as I had problems with the USB ports resetting on the Lenovo when running 100 watts on HF.

Considering Microsoft’s insistence on discontinuing support for Windows XP, its stopping shipments of 7, the issues with Windows 8, and the maturity and popularity of alternatives, it’s a good time to convert to Linux or Mac.

Anthony, K3NG, is a regular contributor to AmateurRadio.com.