Contesting and Murphy what a mix! 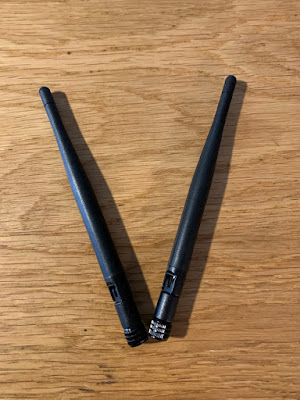 Just taking a break from the WAE CW contest this morning (Sunday) and this contest has been an adventure! Issues with S.T.E.V.E (more about this after the contest in another post) and then Murphy showed up. A few days before any contest I get the PC, radio and N1MM+ contest logger going and make sure all is well, and it was.

Murphy had no issue waiting, I started contesting and things went wrong right at the get-go, as I was CWing "CQ CONTEST" a warning on my PC came up that I lost my internet connection. Then another message informed me my connection had been re-established. This just kept happening over and over and it was only when I was transmitting. This told me RFI was the issue, NEVER up until now have I ever had this issue but such is Murphy.

The contest at this point was a bit slow so I decided to investigate the issue further. I had a theory and that was my new PC motherboard has WIFI and uses two small antennas at the rear of the PC. I checked my settings and I was on WIFI, not LAN....so I thought. I removed the two small WIFI antenna thinking that they would be good at picking up RFI and thus could be the reason. I then set my LAN as the internet connection.

After restarting my PC I was back to contesting but this time there was the loss of internet connection but not as often. Thinking now it was possibly my LAN hub at the rear of the PC. I then connected my LAN (with toroidal chokes) directly to my PC. Again I had intermittent connection issues and I was sure it was still the WIFI and maybe the antenna female connector ends on the PC motherboard were picking up RF still. The issue happened less often so removing the antennas did help.

It was not off to the BIOS to shut the motherboard WIFI down.....going into the BIOS.....what could go wrong here?? Once in the BIOS, I clicked here and there and just could not find any WIFI settings. Closed the BIOS and restarted the PC.
Once restarted I knew something was wrong, the PC was really slow and jerky is the best way to describe it. I went to the internet to see what the hell I had done only to find the internet now was running as if I was on dial-up!

I have now gone from intermittent internet connection to a funky PC and very slow internet speed. Oh, and I also noticed that in my contest program N1MM+ I lost the contest macro setup and all my contacts. I have no idea what that has to do with the BIOS but it happened.
After some reading on the internet on my laptop, I concluded the best thing to do was update the BIOS and MSI motherboards they make it very easy to do. My thought was, that whatever the heck I did will be undone by a BIOS update. After all, I have nothing to lose if I wanted I could reformat the hard drive and slide a backup clone image onto the drive from my backup files on another hard drive. I would have all my programs and setting from an earlier time. Some may think I could just use Windows system restore. In times of need, I have ALWAYS had system restore let me down with a final message after a restore that windows was unable to restore to an earlier date!!

The BIOS updated without any issues and when the PC restarted I was back to normal but the slow internet was still there and RFI seemed to be dropping the connection still. I just happened to go back to Windows 10 internet connections box (for the 100th time) but this time I noticed for some reason I was back on WIFI. I manually changed it back to LAN and the connection issue was gone and the surfing speed was back.

I decided to restart the PC and have a look at the Windows 10 internet connections box again. After the restart, I was back on WIFI again and it would seem for some reason each time the PC was restarted it would default back to WIFI. The very slow connection was due to the fact the antennas were removed and RFI was affecting the WIFI board via the female antenna connectors.

I then just right-clicked on the WIFI connection icon and clicked disable!! You know what folks that did the trick. Only if 2 hours earlier I had done just that I would not have messed with the BIOS, lost my N1MM+ contest settings, squeezed behind my desk to the rear of the PC and wasted 2 hours. Sometimes the solution is just a click away!!