Several months ago I had a plan to build a project using Manhattan style construction so I decided to get a tool to make myself some Manhattan pads. Constructors in the US can buy a nice hand punch from Harbor Freight for $25 – that’s less than £18. Over here the nearest equivalent cost around £90 from a tool supplier, except on eBay. I bought the eBay one, but even that cost over £30 including postage. 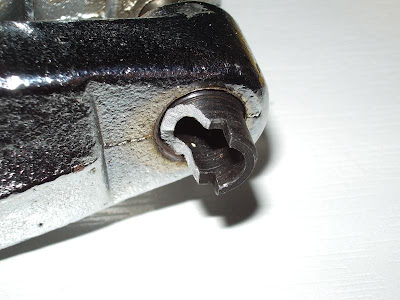 In the end, apart from punching a couple of test pads using the 7mm punch that was already fitted when I opened the box, I didn’t use it. Until this afternoon, when I wanted to make some smaller pads. That was when I discovered what a shoddy piece of manufacturing this eBay hole punch is.

The 7mm die was a bit stiff to remove but came out with the aid of a screwdriver in the slots provided. The 4.5mm one I put in would bind at each turn and got more and more stiff. Eventually it wouldn’t budge, so I put the screwdriver blade in sideways to get a bit of leverage. There was a crack and a whole piece of the die broke off! I guess it was made by the same firm that makes K3 knobs for Elecraft!

It’s far enough in that I can make 4.5mm pads, but not only does it not want to go in any further but it also doesn’t want to come out. I might be able to get it out with some Mole grips but this is probably the most useful size and I might never be able to get it back in again next time I need it. Crap!