30 January 2016 | by Steve G1KQH  |  Share |  Tweet |  Leave a Comment (2)
Since making it known to the world last weekend about the release of "Carrying on the Practical Way" from PW written by G3RJV since August 1996. That particular Blog was proved to be the most eye catching article I have written so far, with Hundreds of hits over the first couple of days of it's issue. I also guess the tills have been busy ringing down at Practical Wireless HQ, at one stage it was marked as SOLD OUT but they soon pressed the restock button and reset this. Does this mean I get a Christmas card from them this year, or George gets a few extra Royalties to help his pension along?

What it does prove though is what I have said before and made well known to PW several years ago, that the G3RJV's series is very popular, and well liked in our circles, and will always be the anchor for the Novice to find a good reference point and solid footing into our hobby. Another way of putting George's work, is like a fine Wine that matures with age, or a Matt Monro recording that never fades, that is of course if you appreciate Matt Monro?

I have now printed some of my missing early parts out and bound them up into a folder, allowing me to read it when I have a boring moment: 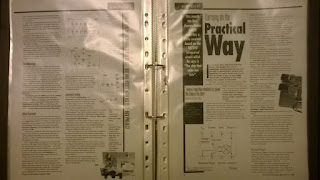 One or Two contacted me to ask if this will be available as a book? I just don't know, but judging by the intense interest of traffic, over to you Practical Wireless!

2 Responses to “Carrying On The Practical Way- Follow up”