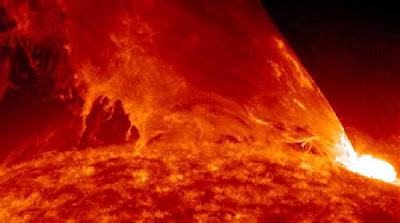 K7RA's 'Solar Update' in this week's ARRL News, mentions Jeff Foust's recent article in 'The Space Review', reminding us again of the dangers posed by a modern-day 'Carrington Event', also known as the 'Solar Storm of 1859'. A large solar flare in late August, hurled a monster-sized CME towards earth, making the 93 million mile journey in just 17.6 hours compared with the more normal rate of several days.
Huge auroras soon lit up the sky as far as central Mexico, Hawaii and the Caribbean. The aurora was so bright, it was reported that Rocky Mountain goldminers awoke in the middle of the night, and thinking morning had arrived, started to prepare breakfast. Telegraph lines and equipment burst into flame while some circuits continued to be usable with power supplies completely disconnected. The 1859 event still remains the most geoeffective solar storm since records have been kept.

Such an event today, of course, would wreak much more havoc ... probably having devastating consequences for decades and causing trillions of dollars of damage.

From Foust's article:
Was that, though, just a fluke event? .... Pete Riley, senior research scientist at Predictive Science Inc., offered a probabilistic forecast for the likelihood of another Carrington-like event, based on that storm’s estimated strength and measurements of the actual strength of solar storms over the last few decades. “If you the (sic) time between events, you can calculate the probability of the next event occurring within some unit of time,” he explained.

His estimate of the probability of another Carrington event is surprisingly high: about a 10 percent chance of such an event occurring over the next decade. “Ten percent is very, very high,” said William Murtaugh, assistant director for space weather at the White House’s Office of Science and Technology Policy (OSTP) ... “A one-percent probability over the course of the next one hundred years of a storm with an impact of that magnitude is considered very, very high and will motivate action.”

Interestingly, for this prediction, the actual strength of the solar storm of 1859 can only be estimated. If it was actually twice as strong as thought, then the probabilities drop from a (decade) 10% probability to just a 1% chance.

The U.S. government has recently set up a NASA multi-million budget funding proposal to study the likely effects of future large scale impacts and possible “response and resiliency capabilities” but it's not known if these will carry over to any new administration.

“Fortunately in space weather there’s no real politics,” Murtaugh said. “Both sides of House, both sides of the Senate, Republicans and Democrats, are both keen to work together to do something about this issue.”

The article has brought some interesting 'food for thought' comments, among them:

I think it is excellent that there are steps being taken to improve our understanding of the probabilities and predictive accuracy of such solar events, but I'm concerned that it isn't entirely clear how that information will translate into major investments in civil engineering that will make us less vulnerable to them. As for asteroidal impact threats, it's one thing to have a observations and research that will provide predictive information, and another to prevent tragedy. In both cases, it's about how we'll actually prevent such destructive effects once predicted. Prevention is a LOT more expensive than prediction, and is thereby ripe for threat denialism, which seems to be an emotion that has thoroughly infected at least the leaders of our nation.

It's a little funny about how much energy is being spent advocating human spaceflight for colonization and settlement as a means to save the species, but so little is being devoted to specific threats to the species, and to individuals in particular. I could get killed in an asteroidal impact or a severe geomagnetic storm, but sending a shipload of people to Mars sure isn't going to protect me.

I am a member of Infragard, which is dedicated to supporting efforts to protect us from risks to our electrical grid and other critical infrastructure. A novel "One Second After" by William R. Forstchen accurately illustrates the effects of a similar intentional attack on our grid and how it creates a cascading collapse of our society. Gas stations cannot pump gas, food rots in the stores, more food cannot be delivered to all the needed locations, and the people who know how to fix things cannot reach where they are needed and also starve to death. The result of a severe Carrington event with no effective preparation or protection for the giant transformers could thus cause most of our population to starve in a few months. This risk is about 1% to 0.5 % per year and is like having everyone playing Russian roulette once a year with 200 pistols where just one is loaded.

A modern day 'Carrington repeat' does indeed give pause for thought but perhaps the generally predicted upcoming 'grand solar minimum' will buy scientists some extra time to come up with solutions for what will eventually occur ... and, one more thing's for certain ... it'll be a heck of an aurora!
Steve McDonald, VE7SL, is a regular contributor to AmateurRadio.com and writes from British Columbia, Canada. Contact him at [email protected].