Bouncing off the ISS

There was recently a change of crew at the International Space Station and one result of that has been the reappearance after a long absence of the packet radio digipeater on 145.825MHz. When the Space Station passes over you can receive some very strong signals from it. I have decoded APRS beacons on a VX-8 handheld standing on a window sill inside the shack. But it is even better to use the main station, then you can see the positions of the stations you received on a map.

When using the ISS you need to use different settings to what you would use for terrestrial APRS. Digipeating, if enabled, must be turned off. You want to be connected to APRS-IS so you can gate received packets to the internet, but you don’t want to send anything received from the internet out to the ISS. You probably don’t want to display data from the internet on the map, to leave it clear to show those stations received by the radio. If you want to transmit through the ISS yourself you must also change the APRS path to “ARISS”.

After thinking that we really need an ISS option in APRSISCE/32 for this it occurred to me that all I needed to do was make a copy of the program in a new folder, then I could change the settings however I wanted without affecting the copy I use for terrestrial APRS. It worked fine. It was fun to see the stations heard via the satellite show up on the map, although when the map is zoomed out to cover such a large area the icons are hard to see. It was also amusing to see that the icon for the ISS’s own beacon was a bicycle. Perhaps someone should tell NASA!

After several abortive attempts to get my own beacon digipeated by the Space Station I set the transceiver to Narrow FM and got through on the first attempt using just 10W to my 300ohm ribbon cable Slim Jim in the attic. The proof is in the map of stations heard through the ISS at ariss.net. 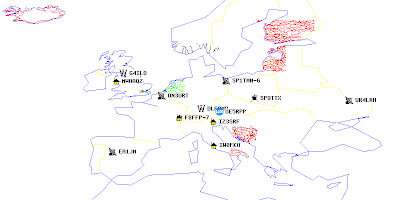 Not a very useful activity perhaps, but fun to try.