BOGO – Buy One, Get One free.  Two for the price of one.  You know what I’m getting at here, right?

Unfortunately, I am NOT announcing a cool bargain on Amateur Radio equipment. If that were the case, I’d probably be at the head of the line. But BOGO does have something to do with QRPTTF for me, this year.

QRP To The Field is just a couple of weekends away.  This year, the theme for the event is “Happy Trails”. As Paul NA5N describes it on the official QRPTTF Website, “About every community has an historic trail or two …… from the biggies like Route 66 or the Santa Fe Trail, to a local old wagon trail, mining or lumber road. About all railroad lines, active or abandoned, are old trails.”

Paul proceeded to provide a link to a list of historic trails, highways and railroads, which I clicked on. And there, right at the top of the list of Historic Highways was the Lincoln Highway.  Holy!  That’s what we now call Route 27 which runs through Edison, just the next township over from South Plainfield.  A quick trip to Wikipedia informed me that the Lincoln Highway is celebrating its 100th anniversary this year.  With Wikipedia’s indulgence, I am going to paraphrase some history. 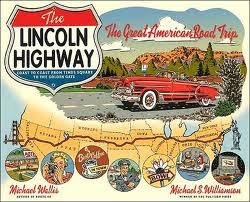 “The Lincoln Highway is one of the first transcontinental highways for automobiles across the USA. The highway turns 100 years old in 2013.  It was conceived and promoted by Indiana entrepreneur Carl Fisher. The Lincoln Highway spans the United States coast-to-coast from Times Square in New York City to Lincoln Park in San Francisco.  It passes through New York, New Jersey, Pennsylvania, Ohio, Indiana, Illinois, Iowa, Nebraska, Colorado, Wyoming, Utah, Nevada and California.  When originally built, it measured 3,389 miles long. After some re-alignments were done over the years, the road currently measures 3,142 miles.”

Thanks to Paul NA5N, I learned more about this road than I ever knew before (isn’t Amateur Radio a wonderful thing!?!).  I have seen some street signs along Route 27 that still call it “The Lincoln Highway”, but I had never bothered to investigate its history before.  But where does the BOGO come in you ask?  It comes in here – as Paul states: “Many old historic trails are also today’s super highways (like Route 66, the Lincoln Highway, etc); we don’t expect you to operate from an Interstate junction!  Find a nice operating spot within a couple of miles if you can to ensure your safety.”

Immediately, I thought of a real neat place to operate from that is literally just a couple of blocks away from the Lincoln Highway: 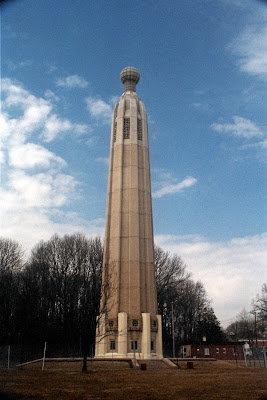 The Edison Memorial Tower, which was dedicated in 1938 and was built on the spot where Edison’s Laboratory was located. It was here that the incandescent light bulb, as well as many of Edison’s other inventions were conceived and produced.  The original buildings have since been relocated to Dearborn Michigan by Henry Ford so this tower and its accompanying museum (which has a parking lot where I can operate from) were built to memorialize the spot.  The tower and museum were just recently renovated and were reopened last year after being closed for a long time due to deterioration.

I am envisioning a special QSL card, designed for the day which will include photos of both the Edison Tower and something having to do with the Lincoln Highway.  Two “special” QRP outdoor events for the price of one – BOGO! This is going to be fun!

One Response to “BOGO”