My hopes that the TH-205E I bought on eBay would be fully operational after connecting the fully-charged new battery were dashed last night when I attached the battery, switched the radio on and got … precisely nothing. However I already had a suspicion as to what was wrong. Whilst searching for information about the radio I had found information about a design fault in early models of the TH-205 that was corrected by a modification in later versions. 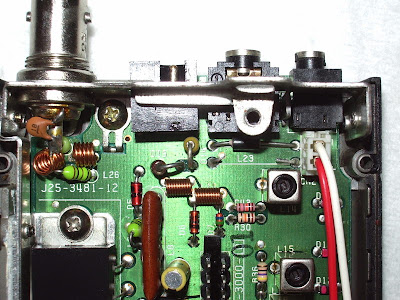 In fact, I’m afraid it was probably me that blew the fuse. When I first plugged in external power from my shack GSV3000 power supply I noticed the current meter quickly blip as contact was made before the power jack disconnected the battery from the circuit. I didn’t know at that time about the fault, or that the original battery was a dead short. It probably isn’t a good idea to plug in DC power leads while the power is on, but I expect I had other radios on at the time and didn’t want to turn the power off.

I opened the TH-205E up again. I could see the wires from the battery went to a jack on the RF board which is underneath the IF board, so I had to remove the IF board to get to it. This really is a nicely made radio and it is easy to take apart. The fuse, with a ferrite bead on one of the leads, was in the obvious position next to the red wire from the battery. In the picture you can see its position marked L23 after I had snipped the fuse out (I didn’t want to remove the RF board from the chassis to unsolder it completely, so I will solder the replacement to the lead ends that are left.)

I didn’t have a miniature 4A fuse to replace it with. The official Kenwood modification is to replace the fuse with a blocking diode to prevent DC power reaching the battery pack. But they use not just any old diode, but a Schottky barrier rectifier diode which has a low voltage drop of about 0.4V. (A regular silicon diode would cause a voltage drop of about 0.9V.) Of course, I didn’t have a 2A Schottky barrier rectifier diode in my parts drawer either.

I did consider simply replacing the fuse with a thin strand of wire. Since I only have the low voltage 7.2V battery pack I don’t really want any additional voltage drop. I know about the problem so I could simply avoid it by not hot-plugging external power into the power jack. But there is always the risk I might forget and I don’t want to do the repair again, so I decided to do the proper modification.

I ordered the diode from eBay supplier PIC-Projects. I have to say that eBay has become my main source of electronic components and is a major salvation when you need an odd part like this. There is no minimum order charge or handling fee that makes it uneconomic to order less than £30 worth of stuff, and the prices of both parts and postage are very reasonable. Sometimes you have to order cheaper parts in quantities of 10 or 50, just like the “professional” suppliers like Farnell, but the prices make it worth while and it helps to build up a stock of parts for future projects. I ordered 5 of these Schottky diodes because they were only 35p each, and I’m sure I’ll find a use for the other 4 eventually.

Hopefully the diodes will arrive in tomorrow’s post and I’ll finally be able to put the TH-205E on the air with its new battery!