Beware a lion on a parachute: My first attempt at tracking High Altitude Balloons on 434MHz

A few weeks ago, I enjoyed tracking two high altitude balloons launched from near Cambridge, across the channel across Belgium, Germany and then finally into Austria. On that occasion, I didn’t have the time to set up the software to attempt to receive the data from the balloons and upload them.

Earlier in the week, I noticed Dave Akerman M6RPI mention that there would be two balloon launches this Saturday. Both quite interesting – one was a fund raising venture for Purley Infants’ School and the second one was even more fun – an attempt to release Kingsley, the Reading FC mascot from a balloon at exactly 18.71 miles above the earth and have him drift down to earth on a parachute. 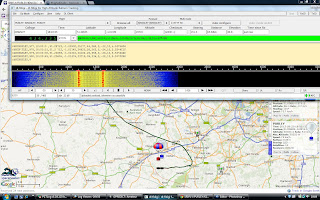 As ever, I didn’t really plan it, but at least I was downloading the DL-FLDIGI software as the balloons were being launched! Data about launches together with a plot about where the balloons currently launched are, is shown on the SpaceNear website

As the balloons were being launched from about 20 miles from me, I was reasonably confident I would hear them. I turned the 432MHz yagi (10 ele) towards the launch site. I picked the Purley balloon and tuned the FT847 to the appropriate frequency on 434MHz SSB. The balloons transmit a RTTY signal. Very soon, I could hear a weak signal.

I fired up DL-FLDIGI and filled in the station configuration details. After a bit of fiddling, I settled on setting the mode to RTTYR (the FT847 was on USB) and I was able to decode some data. Although I was receiving data and could see that it was being uploaded to the Spacenear site, I was getting a lot of bad checksums. Initially, I thought this was something I was doing wrong. However, I think it was because the Purley balloon must have been running quite low power. I will ask Dave about this.

However, when I tuned to the KINGSLEY balloon, signals were very much stronger and I was able to track it well as it rose to the target height, burst and then gently descended to a landing spot not too far from Basingstoke. It was fun tracking it very close to the horizon. Actually during part of the descent, the balloon’s transmit frequency was drifting fast – almost too fast for DL-FLDIGI’s AFC! However, I was able to persuade it to play after a bit more fiddling and a restart of the software!

Now, has anyone in Basingstoke seen a toy lion on a parachute? (actually, the good news is that Dave, M6RPI has recovered both payloads successfully, so Kingsley hasn’t had to sleep out rough..)