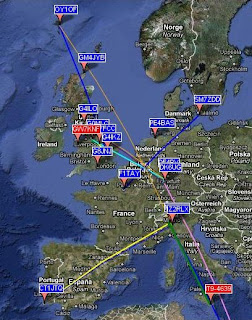 For the last week or so I have been using the K3 for WSPR on 10m to detect the signs of any Sporadic-E openings. Since the opening of May 3rd there has been nothing very exciting to report, though it has been interesting to see spots of stations previously never heard suddenly appear, often at good strength, as a patch of ionization materializes in just the right place.

What has been intriguing over the last few days is the consistent appearance of spots involving OY1OF throughout the day, often with stations in the UK but also with those in Holland, France or Germany.

The distance is too far, obviously, for the ground wave propagation that is often the only propagation reported between closely located stations. The spots are too frequent and too widespread to be Sporadic-E. And they surely cannot be regular F2 layer reflections, as the MUF in this part of the world at this point in the solar cycle is still far too low (the F2 critical frequency is around 4MHz according to the IPS Radiowave Propagation Center.)

Could it be scatter from the ash of the Icelandic volcano?