28 March 2010 | by Anthony K3NG  |  Share |  Tweet |  Leave a Comment (0)
On Saturday I had several folks over for an antenna party.  My two element 10/12/15/17/20 meter quad lost the 10 meter driven element wire over the winter and I was wanting to take the quad out of service.  Quads are great antennas, perhaps magical, but from a maintenance and installation point they are a nightmare.  This quad went through two ice storms and survived, but that wasn't without much gnashing of teeth.  Quads are three-dimensional antennas, so one big disadvantage is they take up a lot of vertical real estate on a tower.  Since originally putting this tower and quad up, I got interested in six meters but I couldn't put a six meter beam up on the tower.

Rather than hinging down the 40' (12 m) Rohn tower as usual I rented a 45' (14 m) manlift locally.  This was a good decision.  This model had a 500 pound (227 kg) platform capacity, so two people plus gear could fit in it.  Once I figured out how to operate the controls, it was a very nimble piece of equipment.  We wore harnesses and clipped into the platform railing with lanyards for safety. 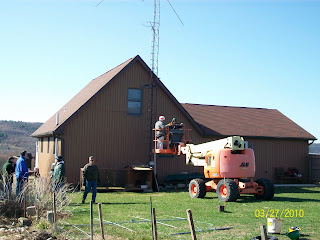 Going up the first time 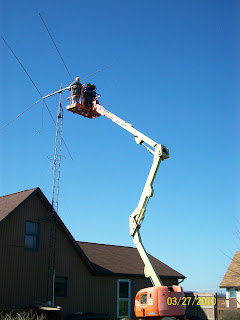 Removing the quad fiberglass spreaders, one by one 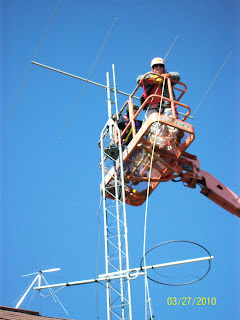 Six meter beam installed
The "new" HF was going to be a restored Mosley TA-33 Senior.  When we got it installed I was not pleased with the way the one inch mast (which was bracketed to the main two inch mast) was flexing.  We de-installed the TA-33 and decided to abort the mission with the HF antenna.  We put a two meter horizontal polarization beam in its place.  So I'm without a good upper HF band antenna for awhile, which is OK with me as the sunspot cycle is low and my interest in HF has been down in recent years. 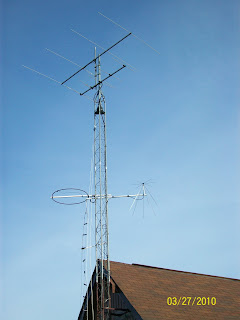 Considering the success I had making a lightweight Moxon for six meters, I'm thinking of experimenting with making a 20 meter lightweight Moxon and using it from a mast or on the rooftop with a lightweight rotator.  If I had my druthers I would install it on the tower at the 30 foot level with a ring rotator, but it appears there's only one company that makes these and they are outrageously expensive.  If I had some tools and more mechanical skills, I would manufacture these at a reasonable price.
It's funny how not having full HF capability has sparked my interest in building an antenna.  It seems the struggle and journey to getting to the station you want is often more interesting and intriguing than when you arrive at your ideal station goal. 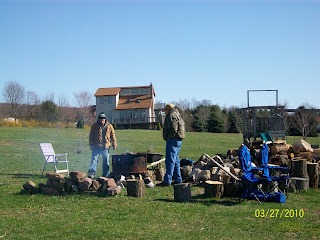 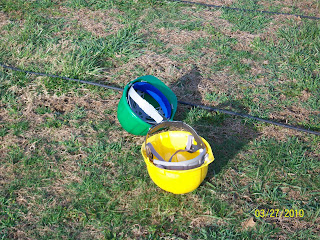 All in all it was a good day.  I got to see some friends I hadn't seen in awhile, I learned how to operate a large piece of equipment, and no one got hurt.