Christmas Eve dawned, bright and sunny. George and Davy took the money that the club had donated, and went out to buy gifts for the adults that would be attending the Christmas Eve dinner at the soup kitchen. They bought nothing extravagant. But they did come back with plenty of toiletries, warm socks, hats and pairs of gloves, some cosmetics for the women. All basic necessities that a lot of these people could not afford to buy for themselves.

Donna started her day by visiting the Church. She knelt down and prayed before the manger scene that had been set up, “Lord, today is Christmas Eve, and tonight we’re going to try and take care of some of the least of your people.  You know what I had planned and You also know what happened to those plans.  I’m really worried about tonight, Lord.  I know that Jason, Davy and his radio friends have promised to help, but I am worried that not having done anything like this before, that they’re in way over their heads. I am worried there will not be enough, and that these folks will come and be disappointed.  But I am going to lay this before you, Lord.  I trust that You will bring it all to a good end, but I could sure use a Christmas miracle”

The day flew by quickly, and Davy, Jason and Jimmy met Donna and Maria at the soup kitchen at 2:00 PM sharp. They began warming up the food that was to be served that evening.  On the menu was a traditional Christmas dinner of roasted turkey (donated by a local restaurant – the owner was a close friend of Chuck  WB2MSV)  along with sweet potatoes, dressing, cranberry sauce, peas and carrots, pumpkin and apple pies and ice cream.

“So Jason, where are all these helpers you promised?” Donna asked.

Davy answered for his father. “Don’t worry Mrs. Pescarelli, they’ll all be here.”

Then as if on cue, a caravan of car after car after car pulled into the parking lot. Hams, their wives and their children came, bearing cookies, desserts, toys for the kids, and coats – warm winter coats. Another one of Chuck’s friends from a local thrift shop had provided donated coats for kids, coats for adults…coats for anyone who needed one. Some of the coats were never used and still had their store tags on them.  Donna was overwhelmed by the outpouring of generosity. By the time everything was collected to be handed out, she realized that she now had two or three times the amount that was stolen. 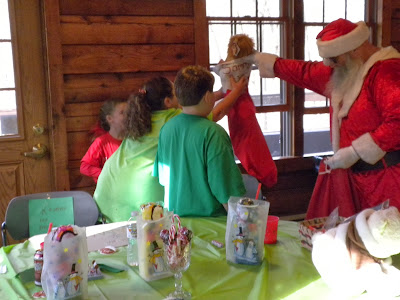 True to fashion, the Radio Amateurs jumped in and took over. Not only did they help to finish setting up,  but they rolled up their sleeves and stayed to help to with preparing the food. They welcomed the guests and served dinner. Afterwards, yet another TCARC club member, Charlie N2LHD, came dressed as Santa, and handed out the toys to the kids. There were enough presents so that each child got not just one, but two or three things that were on their lists. In addition, the Ham’s wives, or XYLs, as they were affectionately known, went to each adult and handed out bags containing home made cookies, socks, toiletries, and other personal items. Anyone who needed or wanted a new coat, hat, or gloves was welcomed to a side room where they could pick out their size from the donated items.

For several hours, there was merriment and joy in the air as food was eaten, gifts were opened, fellowship was enjoyed and Christmas Carols were sung. As the St. Nicholas Soup Kitchen Christmas party was winding down, Donna went up to Santa to thank him.

“Don’t thank me, Ma’am” Charlie explained. “If anyone deserves thanks, it’s George, Davy and Jimmy, and our Club President, Chuck Phillips.  They are the ones who pulled this off.”

Chuck WB2MSV started talking with Donna, “You see Ma’am, we Hams have a favorite saying that we’re ready for “When all else fails.” George, Davy and Jimmy explained your situation to us at our last club meeting, and it sure looked to us like you had a real emergency on your hands. Well, we Hams seem to do our best when the chips are down, and we weren’t about to stand by when you needed help the most. We might not have been responding to a blackout or a storm, but the chance to save Christmas for a bunch of good folks was more than we could pass up. And besides, isn’t this the time of year for giving?”

Donna answered by giving Chuck, Charlie, Jason, George, Davy and Jimmy a great big hug. “You are all wonderful in my book. When we were robbed, it really threw me.  I just about lost all my faith that people would still do good things these days. But I took Jason’s advice and said a prayer to ask God for a Christmas miracle. It looks like He gave me one, along with a bunch of Christmas radio angels,  And believe me, both I and these people sorely needed you. God bless you all .. and Merry Christmas!” 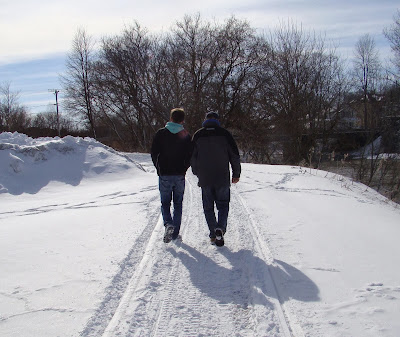 As they were leaving the building and heading for home, a light snow began to fall.  As they were walking to their car, Jason looked at Davy and said, “C’mon over here, Bud”.

His father gave him a big hug. “You’re not too old for one of these from your Old Man, are you?”

“Davy, I just want you to know how proud of you I am. You’re turning into quite the young man.”

Author’s Note – some of the names and some of the call signs used in this story are actual names and calls of some of the finest Hams I have had the privilege to know, and who are now Silent Keys. One or two of the calls may have been re-issued through the Vanity Call Sign Program, but being remembered here in a special way are the original holders:

These gentlemen listed above were selfless to a fault and would give you the shirt off  their backs, if they saw the need. Had the circumstances of this story been real, these gentlemen would have been first in line to lend a helping hand. 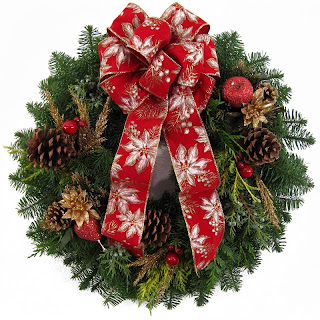