It has been yet another fabulous summer day here in Cumbria. I’m in good spirits and physically feeling fitter by the day. I think the balance issues and “jelly legs” are more an effect of the brain operation than a lack of fitness. Perhaps the same reason my hands often shake badly and cause frustration when trying to attempt soldering.

We decided to go for a walk over the fields to the north of Cockermouth and have a picnic lunch. I took the Taiwanese twins in the hope of making a few radio contacts whilst we were out. 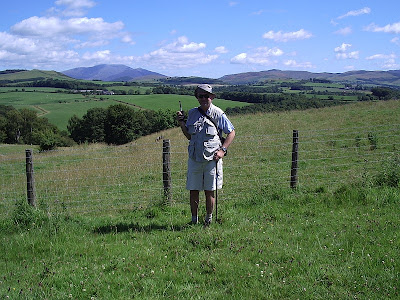 The walk involved some gentle climbing up from the valley. On the way I heard Alan M1EYO/P call on 2m to activate the SOTA summit of Watch Hill G/LD-054 which is almost literally in my back yard. You can see it on the far left of the picture behind me. When I was fit I could walk to Watch Hill though I never did as there was not much attraction in walking for an hour and a half to reach the summit when I could park the car within 15 minutes walk of the top. With no car unfortunately even Watch Hill is out of bounds.

After I worked Alan we carried on walking until we almost reached the Carlisle road, where we found a grassy south facing slope to have lunch. This is probably the only portable site that I can reach on foot from here, though it isn’t a very good site as it is still within the Derwent valley or “Cockermouth black hole” as I call it.

Checking 2m from time to time with a 5/8 telescopic whip on the 2m radio I heard Richard G1JTD/P activating Illgill Head G/LD-029. With a bit of help from Tony G1OAE Richard heard me and we made a contact. I had to use the monitor button to disable the fixed squelch on the H112PLUS which is set far too high. The receiver on the 5/8 telescopic seemed quite poor possibly due to intermodulation or overload. These really are terrible radios!

Alan was going to activate Binsey G/LD-041 a favourite of mine which was in fact the last summit I activated so we waited until he called on 2m and I had another contact. Alan told me he had discovered Rob G4RQJ on the other side of Binsey summit working 40m and setting up to try 4m. I pricked up my ears at the mention of four metres and about a minute later I heard Rob calling on the other H112PLUS so I was able to make my second-ever contact on 70MHz. Binsey is also line of sight from where I was so it was not a DX contact but it was still nice to make a contact on the 4m band.

After that we packed up and walked home. It was a pretty tiring day’s outing for me, definitely the furthest I have walked and the highest I have climbed since my operation. But it was quite a morale booster to get out on such a nice day and do some portable operation. There are even some trees there I could try to get some wire over for some HF operation with the FT-817 in the future, so that’s something to look forward to.

One Response to “Almost a fellwalk”