On June 21st, I worked Steve K7PX on Mount Garfield (W0C/FR-040) using 2m fm to push me over 1000 points to quality for the SOTA Shack Sloth Award using only VHF. This is my first significant SOTA award, which I have been working towards for several years now. I decided to pursue Shack Sloth using only the VHF bands, which is much more difficult than using HF. Why? Something about mountains, Height Above Average Terrain (HAAT) and VHF radio has always intrigued me.

Here’s the line up of my top chased summits, with Mt Herman and Pikes Peak taking the clear lead. Mt Herman is The Most Radio-Active Mountain in Colorado and it is in my backyard. Most of those contacts were with Steve WGØAT and Frank KØJQZ. Thanks, guys! Pikes Peak is also a clear VHF shot from my house and many SOTA activators and tourists like to activate that summit. No surprise, the rest of the summits are various peaks in Colorado, worked from my house or from our cabin near Trout Creek Pass. Quite a few of these are Summit-to-Summit contacts made when activating peaks, often during the Colorado 14er Event. 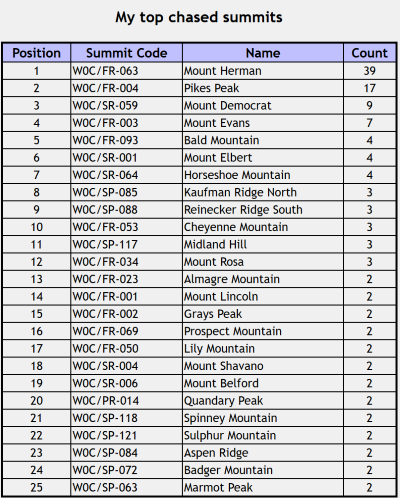 Most of my thousand points were contacts made using plain old 2m fm, The Utility Mode. A few contacts were made on 2m ssb along with some 70 cm fm and ssb contacts. I have been encouraging folks to try 2m ssb for huge improvements in weak-signal performance but the universal nature of 2m fm seems to be winning out.

My next goal is Mountain Goat with VHF only. I’ll need to activate a lot of summits to get that done, so it will take me a while. It’s always good to have something to work towards.

The post All VHF Shack Sloth appeared first on The KØNR Radio Site.

One Response to “All VHF Shack Sloth”