4 March 2016 | by Larry W2LJ  |  Share |  Tweet |  Leave a Comment (0)
The South Plainfield Amateur Radio Club has two meeting nights each month. The fourth Wednesday of each month is our "official" business meeting, where we take care of all the normal matters that come before any Amateur Radio club. 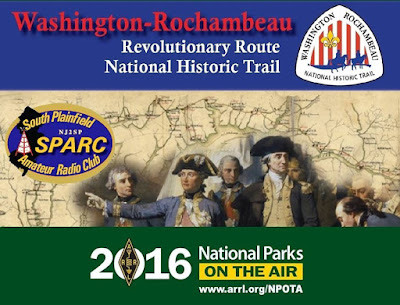 The first Wednesday of each month is our informal "Operating Night" meeting.  This tradition was instituted by our founding and current Club President, Marv K2VHW.  His idea was to have an evening set aside where the older members of the club could meet with the newer Amateur Radio ops and engage with them about some radio or operating related topic. 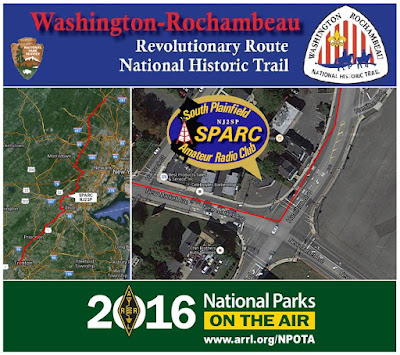 Designed by Dave Hackett KD2FSI
Marv has been down and out with some back troubles, so at our February meeting, Ron N2LCZ. our Recording Secretary, suggested that for the March operating night, that we should do an NPOTA activation. The Washington-Rochambeau National Historical Trail (TR23) runs right in front of our meeting place, the South Plainfield CERT Building, which is on the corner of Hamilton Boulevard and New Market Avenue - Hamilton Boulevard is part of the trail.

We are, quite literally, only about 25 feet or so from the roadway, and the Trail.  Our meeting place was originally a gasoline filling station that was converted by the South Plainfield Police Department into a satellite Community Policing Building.  When the SPPD took over the mantle of Emergency Management, they generously offered use of the building to the South Plainfield CERT/RACES team.  SPARC is allowed to use the building for its meetings. 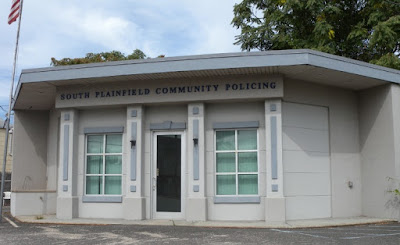 So last night we got together to put NJ2SP on the air.  Dave KD2FSI set up some equipment, his Yaesu HF transceiver and ran some coax out to the screwdriver antenna on his van. Power was provided by a Werker deep cycle battery. We started out on 20 Meters, where unfortunately, we had a close to S9 noise level.  Even so, we made QSOs from the West coast to Suriname.

When 20 Meters dried up, we switched over to 40 Meters where the background noise level was slightly lower, but the incoming signals were much louder. And that's where the bulk of our 51 QSOs were made. We were busy for the better part of an hour.

The best part about it all was that neither Dave or I made the QSOs.  I sat there as a logger and "QSO Coach" (and control operator) while some of the other members of SPARC, who have no regular access to HF took over. It was not hard to tell that they had a blast and after one or two QSOs, they were behaving like HF veterans.

The high point of the evening was when a visiting YL sat down and took over the microphone.  I scribbled out a brief script for her, so she would know what to say and she took off and hit the ground running.  40 Meters seemed like it was quieting down, but as soon as her voice went over the air, the dam broke loose and we had another pileup on our hands. Lee Ann has visited our club a few times and is deciding whether or not she would like to pursue obtaining her own license.

I am willing to bet that last night sealed the deal.