One of the things I’ve been up to the last few weeks is testing a new Bluetooth TNC made by Rob WX9O who is selling them as Mobilinkd. I had to put testing on hold while my Motorola smartphone went away to be repaired (by BuzzBox whom I can recommend highly.) In the meantime word got round and Rob sold out of these gadgets before I could write about it. 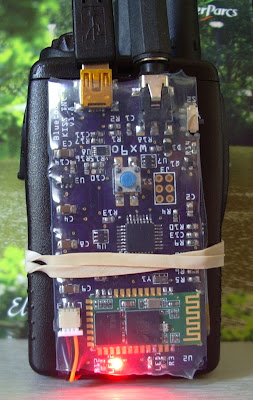 The price was around $49.95 which I thought at the time was amazingly cheap and probably explains why they are all sold out at the time of writing. The module is a small PCB slightly smaller than a Baofeng UV-3R and if you remove the belt clip it can easily be fixed to the back of it. My picture shows it strapped to the back of one of the Baofeng’s predecessors, where it makes a nice inexpensive and compact APRS tracker. The board and it’s battery (which can be charged using a USB cable as shown in the photo) are shrink-wrapped in a tough translucent plastic casing.

Ready-made cables are available. Rob sent me a Kenwood-format two-pin connector which fits the later model Baofengs and the two worked together perfectly. The audio levels were just right on both transmit and receive.

Yes, receive. This is no mere tracker. It’s a full KISS TNC and decoded all the packets received by the Baofeng. The software used was the latest APRSDroid running on my Motorola Milestone (a.k.a. Droid) smartphone.  Droid and TNC paired easily and made an effective APRS mobile station.

If you are interested in APRS and would prefer to do it over the radio rather than a cellular data connection (real hams use RF, right?) then this is a nice toy to play with.

One Response to “A tiny Bluetooth TNC”