A short vertical for 160 meters 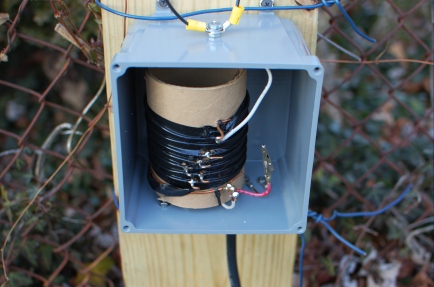 160 meters, Topband, …the names conjure all sorts of visions of grandeur, enigmatic propagation modes, and big antennas in the minds of hams everywhere.  Since I have lived on suburban lots for the past five and a half years and in an apartment for two years before that, it has been the better part of a decade since I’ve had my own permanent 160-meter antenna system at my “home” station.  (Despite this, I did manage to get 160-meter WAS from NO9Z’s station and if my Rhode Island and Delaware contacts ever upload to LoTW, I’ll request the certificate from ARRL.)

So, the story at hand.  Just before the November Sweepstakes contest, I put up a secondary 80-meter antenna—the open-wire fed dipole I used at K8GU/9.  Its performance was underwhelming and the vertical seemed to play just fine.  But, I got busy and just left it up in the trees.  Somewhere in the annals of the Blog, I may or may not have described this antenna, which was designed to also operate on 160 by shorting the feeder and feeding the whole mess against ground.  I never used this functionality because I had to lay radials on top of the patio and that was a pain to take them up and put them down.

The North American QSO Party was this weekend and I’ve been participating in the NCCC Sprint Ladder, both of which include 160 meters.  Around about last Thursday, after the NS Ladder, I decided it might be fun to have 160 for the NSL and NAQP.  So, I ducked out of the office early on Friday afternoon and set about stripping the old tuning network from the K8GU/9 incarnation of the antenna.

We have a lot of AM broadcast stations in the DC area.  And, because of that, antenna analyzers are not always too useful on the low bands.  So, knowing already that the antenna was near self-resonance after my K8GU/9 efforts, the first thing I did was just hook the antenna up to a TS-930 and give it a 5-10 watts fed against my nearby 80-meter vertical’s radial field.  Sure enough, the VSWR was about 3 at 1.999 MHz and off-scale at 1.801 MHz.  So, I inserted the loading coil from the old matching box.  The coil is just #14 THHN solid wire in approximately the optimum-Q configuration of diameter to length and wound on a cardboard shipping tube.  (As is clear from the photograph, it’s not really pretty nor the lowest-loss possible.  But, it was great for what I had on-hand.)

The coil has four taps on it.  I clipped the fourth tap, shorting the bottom half of the inductor and did the VSWR sweep, finding a dip at 1.950 MHz or so.  Each successive tap brought the minimum lower and lower.  With no taps clipped, it was tuned to the bottom of the band.  I got lucky (erm, did a lot of tweaking at the previous QTH). 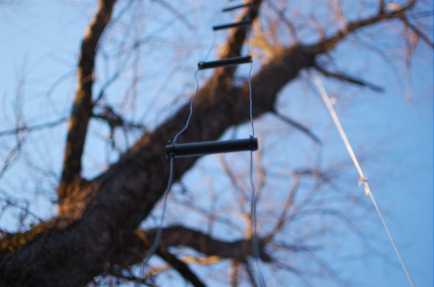 The best news of all of this is that there is enough RF actually being radiated (not just as heat, either!) to make some contacts!  Further good news is that even though the antenna is between three and five feet from my 80-meter vertical, with the W3NQN filters, I can operate SO2R on both bands simultaneously.  Of course, the RX noise level may just be hiding the trash.  I haven’t tried the K9AY because I had that portion of the station torn-up during the conversion of all my DC accessories to PowerPoles and the preamp popped a fuse in my RigRunner when I plugged it back in.

The bottom line is that it’s not a full-sized 4-square, but it gets me on 160 from my lot in a way that’s compatible with my operating style.