The weather here ever since I was diagnosed with a brain tumour has been glorious. One of the bitterest frustrations for me has been being housebound, able to do little more than walk slowly to the shops and back instead of going for walks in the hills and activating Wainwright summits as I had planned to do. On Thursday Olga and I caught a bus into Keswick for a day out. I took along the little Baofeng UV-3R handheld in the hope of catching some SOTA or WOTA activators from the surrounding fells whilst I was there. I was pleased to make contacts with Mark MM1MPB/P and Terry G0VWP/P during the day. 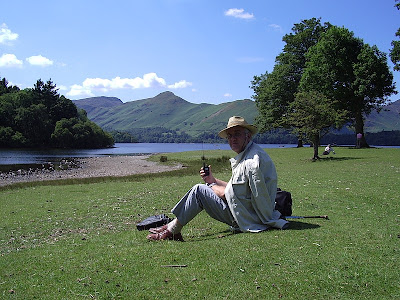 I love this little UV-3R radio. It’s so small and light you can take it anywhere and the range of its 2 – 3W on the slim Nagoya NA-666 antenna I have put on it is amazing. It can receive broadcast radio so I can listen to Classic FM or BBC Radio 3 and if someone puts out a call on the 2m FM calling channel the music is interrupted and I can reply to them. The Baofeng is not ham band restricted so I have also programmed in the 8 license-free PMR446 channels and can use it to talk to Olga who has a little Goodmans set that I bought for a tenner on eBay. I can even dual watch between Olga’s channel and 2m channel S20 so I don’t miss anything.

My only niggling annoyance with the Baofeng is the audio volume level, the lowest setting of which is too high so that any station using wide FM deviation – which most folk round here do – is audible to anyone within a 50m radius. There is a mod for this, which involves putting a resistor in series with the speaker, but having tried a small soldering task a few days ago and succeeded only with a lot of difficulty I think that performing the mod would be beyond me.

I know from the Yahoo group that there is not much quality control on these Baofengs and one or two people have had the misfortune to receive radios that don’t work correctly. But for me this has been the best thirty quid I ever spent on a bit of radio gear.

3 Responses to “A little portable”