A day of ham radio

6 September 2011 | by Mike VE9KK  |  Share |  Tweet |  Leave a Comment (0)
It is a very rare event when I am able to spend a majority of the late afternoon and early evening on the radio. Julie and rose this morning to do a much needed house cleaning once that was done it was time for a walk. It's September and the weather is starting to change on Saturday it was 38C with the humidity but Monday it was a nice 18C. After our walk it was  hobby time for both Julie and I, her with photography and me ham radio. I began by starting the PC and opening up the QRP spot website. I noticed a spot for VA2OTA who was activating a summit for summits on the air. I tuned to 14.060 for a listen but was not able to hear anything...... according to the spots he was there and looking for contacts.

So I setup VFO B on the k3 for 14.060 using my new Grove HS-900 antenna. This way I was able to listen for VA2OTA with in my right ear and on VFO A cruise all the other bands for contacts with my left ear. While waiting for VA2OTA my left ear picked up 4O3A at 14.019 I gave him a call and he came right back with a 599...not bad for 5 watts and an attic dipole. It was a very short QSO as he had many in line
waiting for him. I was hearing some action in my right ear but it was only other stations working VA2OTA so it was off to VFO A again to see what was out there. 40 meter was not to busy as it was still early so back to 20 meters. I came on a QSO that was just ending so I waited and called Vito ON6VL he came back to me and gave me a 559 report. Conditions were changing and Vito was starting to loose me so we ended our QSO. It was back to the computer and someone who posted a spot for VA2OTA said they had to use the audio peak filtering on their K3. That got me thinking and I not only used the APF (a link to YouTube for an example) but diversity mode as well. BINGO it worked at 14.060 VA2OTA jumped out of the noise floor. Now mind you it was...JUST....above the noise floor. I waited for my turn as there was a line up wanting to make contact. I gave him a call and he came back to me we exchanged reports and that was it.  So over all the radio time was a success. 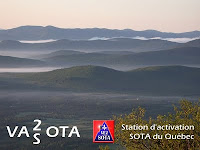