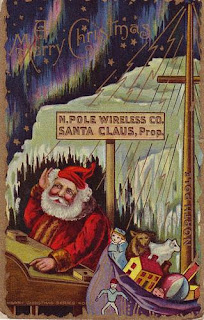 No sooner had the question entered Davey’s mind, than he heard some noise come from the backyard.  As the boy walked up the driveway to investigate the source, he saw George Mason fumbling with some tools.

George looked up to see Davey’s smiling face.  “Why Davey!  You’re a sight for sore eyes!  I’m trying to measure out some wire for a new antenna. It’s hard to manage tape measure, wire and wire cutters all at the same time.  I could use another four hands, or maybe an octopus. Want to lend an Old Ham some help before you go in your house?”

“What’s the matter Davey?  Something happen?” George asked his young Ham friend.  He could tell from the way the expression on Davey’s face fell that something wasn’t quite right.

“Well, Mr. Mason, it’s like this.  I was helping Jimmy with his books on the way home from school.  He can’t manage them well and deal with his crutches at the same time.  Anyway, he dropped one as we were crossing the street. When I bent down to pick it up for him, the house key popped out of my jacket pocket and went down the storm drain.  Dad’s going to have a fit!” the boy explained.

“Oh, Davey!  No worries! Your Dad’s not going to have a fit.  I’ll tell you what, you help me measure out and cut this wire and then I’ll go inside and phone your Dad to tell him what happened, and let him know that you’re at our house.  Your Dad is a good man and I’m sure he’ll understand that it was just an accident. And you can stay with us, of course, until your father gets home.  By the way, Mrs. Mason just baked a fresh apple pie today; and I’ll bet you it’s just about cooled down enough for a slice”.

“That’d be great, Mr. Mason. Thanks for your help!  So ……. Exactly what kind of antenna are you putting together, anyway?”  Dave had a keen interest in antennas and how they worked.

“Well, Davey ….. It’s something that I found in the ARRL’s Antenna Book.  It’s called a W3EDP antenna and it was first used way back in the 1930’s.  It’s based on the wire antennas  that used to trail from zeppelins.  I need something that will get me onto 80 and 40 Meters. My vertical is good on 20 Meters and up, but it sure doesn’t do anything for me on the lower frequencies, and now that Winter is just about here, I’d like to get on those bands at night.”

Dave helped his neighbor measure out the wire and handed Mr. Mason the wire cutters when they were needed.  When they were finished, the two Hams went inside.

“Davey, why don’t you sit down and take a load off? I’ll call your father like I promised. And don’t worry, I seriously doubt that he is going to have a cow!”

Dave settled down at the kitchen table and engaged in some small talk with Mrs. Mason while George telephoned Jason Bolton, Dave’s father. Jeannie Mason doted over Davey and she loved him as if he were her own. She was always like a grandmother to him, but after his mother died, she became even more devoted to him.

After a few minutes, George came back in the kitchen. “Good news, kiddo!  Your Dad understood completely.. He even said that it was good thing that you were here. He was actually going to have me come over to your house and have me bring you over here. Looks like he has to put in some overtime again, and he wanted you here with us. So it looks like that slice of pie I promised will end up being dessert, as you’ll be eating dinner here. Do you have any homework?”

“Yes, Mr. Mason, I have some Science reading and a Math worksheet to do.”, Davey responded.

“Better get cracking then. I think Mrs. Mason is planning to have supper ready in about an hour. Isn’t that right, Dear?”, he asked.

She nodded affirmatively, so Davey started in on his homework. George told Davey that after dinner they would go down to George’s shack and cobble together the antenna that they had cut the wire for.

A couple hours later, after school work was finished and dinner was eaten, the two radio operators found themselves in N2EBA’s basement shack. Davey loved being in “a real Ham shack”, as he thought of it. There were quite a few pieces of Heathkit gear that George had built and had lovingly maintained over the years. The jewels of the shack that Davey had envied the most were George’s Elecraft rigs. A KX1, a K1, a K2 and a K3 were all on the main operating bench. George was a die-hard kit builder, QRPer and a CW man. The only thing missing was the new portable rig, the KX3. George was putting money on the side for one, and when it arrived, George had promised Davey that he could be involved in the build. That suited Davey just fine, as he had dreams of owning his own copy of the radio which had caused a huge buzz among members of the QRP community.

Tonight, however, they concentrated on building the new antenna. They talked as George watched while Davey soldered wire to some window line.

“Sorry that you have to be here instead of home, Davey”, Mr. Morgan offered.

“I don’t mind in the least, Mr. Morgan. I just wish my Dad didn’t have to work so much. But the overtime is helping him pay off what’s left of Mom’s medical bills. It’s been real hard on him since she died.”

“I know it’s been tough for him, Davey. You’ve been a big consolation to him. He’s told me several times that he doesn’t know what he’d have done without you. But enough of that talk, Christmas is coming real soon. If you don’t mind me asking …. are you and your Dad putting up a tree this year? I mean with your Mom passing on earlier this year and all…”

Davey nodded his head, “Yeah we are, Mr. Mason. Dad told me that Mom made him promise that we would. She’d be mad if we didn’t celebrate Christmas on her account. It was her favorite holiday.”

“Well then, have you given any thought to what you’d like to find under your tree?”, George asked, his eyes twinkling.

“Heck, yeah!” Davey blurted out, “I’d sure like to see a KX3 under there! But I don‘t even dare think about that.  With all those medical bills, there‘s no way I would even mention that that‘s what I really, really want.  So in the meantime, I’ve been saving what I can from my allowance, birthday money I’ve received and grass cutting money that I’ve earned. I’d like to be able to buy one on my own, but it feels like it’s going to take forever to save up that much money!”

One Response to “A Christmas Story – Part 2”