A packet arrived from China this morning containing a 16×2 LCD module which I purchased for the absurd sum of £1.93 including shipping. That wouldn’t cover the postage from a UK supplier. I don’t know how the Chinese do it and make a profit. 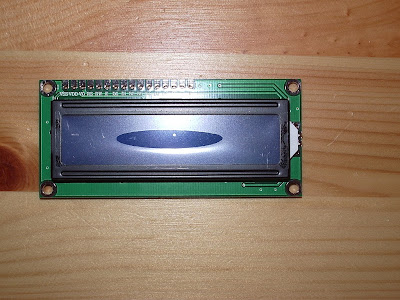 I bought the module with the intention of using it to make a user interface for my Parallax Propeller beacon. Having ordered it I was not sure how to interface the LCD to the Propeller so I chickened out and ordered an LCD UI module from Gadget Gangster. This is rather more expensive (though still a reasonable $29.99) but it includes a 4-way + depress button for menu navigation, plus a separate red button. It plugs straight into the Gadget Gangster board.  I reasoned that even with the hardware sorted the software would be enough of a challenge.

I have rather ambitious plans for this beacon. Perhaps over-ambitious. After reading Alex G7KSE’s blog post about his Arduino based MSF 60kHz receiver I’m interested in interfacing one of the inexpensive MSF receiver modules to the Propeller. I could use this to display an accurate clock and also to control the start of WSPR beacons. As I’m a bit of an accurate time nut and have two radio controlled clocks in the shack (and a radio controlled watch) it is really no trouble to press a button to start the beacon at the beginning of an even minute and then keep time from there. But that isn’t the point really, is it? What could be cooler than a shack clock that is also a WSPR beacon?

This microcontroller stuff is new to me and I have a lot to learn about it. One question I have is what do constructors who use Arduino boards or similar things like the Gadget Gangster do when they want to make a finished project? Do you just buy another development board to use for the next project, or are there simpler boards with just the microcontroller and its essential ancillary components which you use for the final version? I guess I’d still want the ability to update the software (firmware?) so there isn’t much of the Propeller Platform board that I wouldn’t be using.