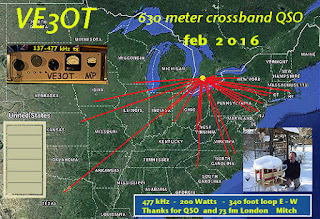 In it, Raab tell us:

"In a sense, 630 meters has become a mainstream ham band, in spite of not being authorized in the US".

"The paths to VK and JA have remained good. This was not the case last year, so perhaps it is an effect of the coming solar minimum. Many reports have been received for WSPR transmissions with relatively moderate power. There have been a number of polar and high-latitude openings to LA2XPA from North America. Many long-time operators say that they have never seen anything like that. There have also been a number of openings from the US west coast deep into Europe."

The ARRL's full report can be read here.

Also touched upon was the upcoming "Midwinter 630m Operating Activity", the second such February event ... this year to be held February 4-5th.

Stay tuned here for further details. Highlighting the event will be another opportunity for U.S. and Canadian amateurs to attempt CW crossband contacts with six Canadian stations operating on specified frequencies in the 630m band. Canadians will listen for callers on specified frequencies within the 160, 80 and 40m bands. Previous events have had much success, with Transcontinental and Transpacific CW crossband contacts being completed by many stations.

A detailed schedule of frequencies and times will be published as the event draws closer but in the meantime, see if you can keep February 4th (Saturday night) open for some 630m crossband excitement!
Steve McDonald, VE7SL, is a regular contributor to AmateurRadio.com and writes from British Columbia, Canada. Contact him at [email protected].