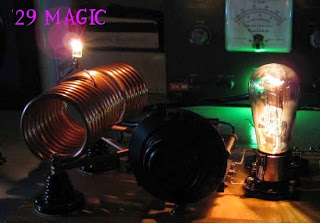 This Saturday as well as the next will be the annual Bruce Kelley 1929 QSO Party, otherwise known as the '1929 BK'.

It's the once a year opportunity to celebrate the sounds of early amateur radio ... only transmitters that are 'era-appropriate' are allowed to be used. More specifically, transmitters must employ tubes that were available in 1929 or earlier, and transmitters must be self-excited. No crystals allowed! Crystals were new and largely unaffordable for most hams back in the depression days.

1929 marked a real turning point in amateur radio as governments finally cracked-down on things such as frequency stability, out of band operations and re-alignment of call districts. In short, hams were henceforth required to behave themselves and to clean up their signals and methods of operation.

Although the new rules did a lot to improve things when it came to 'signal purity', there was still a long way to go ... but the wheels of improvement had been officially set in motion and the next decade would see monumental changes in both transmitter and receiver architecture, as engineers along with some particularly gifted amateurs, strove to unlock the challenges of this relatively new technology.

If you tune across the CW bands during the next two Saturday nights, you will have the rare opportunity to hear exactly what the bands must have sounded like back in the early '30s'.

For the most part you will hear single tube Hartley, Colpitts or TNT oscillators with a few two-tube MOPAs' thrown in. Many of them will suffer the same problems encountered by the boys of '29 ... chirp, drift, buzzy notes and frequency instability from antennas swaying in the wind. The MOPAs' will sound much better but some surprisingly nice-sounding signals can be heard coming from properly tuned and optimised single-tube oscillators. I recall being blown away by the lovely sounding signal I heard from such a rig when first tuning into the BK activity several years ago, only to learn that it was a self-excited Hartley using 1/4" copper tubing for the oscillator tank circuit!

The '29 watering-hole on 80m will be around 3550-3580 kilocycles (be careful not to confuse this with kilohertz!) while the early afternoon to sunset 40m activity will be found from 7100-7125 kc. There may even be a few on the very low end of 160m, later on the first Saturday night only. Although many of these transmitter styles were used on 20m and higher, BK rule-makers have wisely decided not to inflict these sounds on the present populace as it would likely keep the 'Official Observer' guys busy for several days writing pink-slips.

You can learn more about amateur radio happenings leading up to and following the 1929 crackdown in my earlier series of 'Why '29' blogs here:

Part 1
Part 2
Part 3
Part 4
Those wishing to put something together for next year's event can find everything needed here:

Heck, there me even be time to throw something together for the following Saturday if you have a few parts and an older tube or two ... the '27 comes to mind and is readily found in many junk boxes. Maybe you know an old timer with 'lots of stuff' that could help out.

Unfortunately due to a number of coinciding events, I'll not be on-the-air for the event this year, the first one I've missed since getting in on the fun several years ago.
Steve McDonald, VE7SL, is a regular contributor to AmateurRadio.com and writes from British Columbia, Canada. Contact him at [email protected].