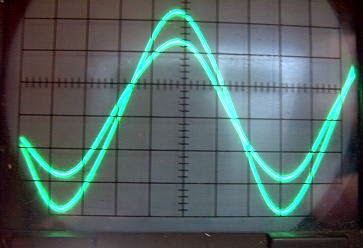 As mentioned in Part I, my construction of the MØBMU-designed Scopematch has proven to be the most valuable piece of test gear in my LF station. If you plan to become active on our new 630m band, it is well worth taking a few hours to build as it will make antenna tuning much, much easier than trying to get your antenna tweaked using other methods.

After building and installing the new Scopematch, a quick check of what I thought had been a properly-tuned system, surprisingly revealed that my 2200m antenna was neither matched correctly nor tuned to resonance! In spite of my poor-tuning (using the system shown in my last post), I had still received a number of encouraging reception reports from VE6, Washington and Oregon, giving me false and undeserved confidence in my earlier tuning attempts. The Scopematch soon changed all that.

The complete building instructions and operating description for the Scopematch may be found in "Tuning Aids for the 136kHz and 500kHz Bands" by Jim Moritz, MØBMU.


As can be seen, a small RF sample taken by the Scopematch is coupled to the inputs of a dual-trace oscilloscope...one channel displaying the antenna current waveform and the other displaying the voltage waveform. When the antenna system has been tuned to resonance and matched to 50 ohms, both sine waves will be equal, in both phase and magnitude as shown below.
Such a condition is ideal and virtually guarantees that your transmitter is looking into a non-reactive 50 ohm load. Many transmitter designs utilized on LF employ inexpensive switching MOSFETs operating in either class-D or class-E modes that cannot tolerate any reactance in their output load. The end result of such a condition quickly produces a growing pile of dead MOSFETs!

If the system is not tuned to resonance, the phase of the waveforms will not be the same and one waveform will lead the other. Whichever waveform is doing the leading indicates whether the antenna is tuned above or below the desired frequency so that proper corrective measures can be taken to achieve resonance. 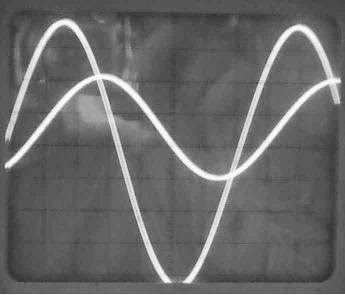 The condition shown above illustrates the smaller waveform (V) lagging the larger current waveform (I) which indicates the antenna is capacitive or too high in frequency.With 'I' being greater than 'V', the resistive component of the load measures about 20 ohms.

The condition shown below indicates resonance but with 'V' being greater than 'I', the resistive component of the load measures about 80 ohms.


The impedance match will be indicated by the amplitude of the two waveforms. Depending on which waveform is higher or lower indicates if the resistive impedance component is higher or lower than 50 ohms. Actual impedance values can be calculated from Ohm's Law using the sampled
waveform values.
It is fascinating to watch the scope patterns during windy conditions when the antenna's large tophat section is being blown around, causing slight changes in impedance and resonance. The two waveforms will expand and contract as well as shift phase slightly...almost as if the system is alive and breathing!


Jim's article goes into much more depth as well as showing alternative methods of construction and is very much worth studying. Over the last few years I have suggested the Scopematch to several LFers who, like me, now wonder how they ever lived without it!

One Response to “Your LF Station’s Best Friend – The Scopematch PT.II”