Yet another Arduino clock

Does the world need more Arduino clocks? Maybe not.

But I needed another Arduino project as I had made a K3NG morse keyer. I love this keyer because it is unique in supporting a display where you can see what you send. But I wasn’t using the morse keyer all the time, so I wanted the hardware to serve two purposes. That’s the excuse for also making a clock.

Its main features are:

The hardware for the K3NG keyer includes a speed pot and a memory bank selector (to the right) as well as four push buttons on top for selecting memories. The pot now controls the intensity of the display, but the bank selector switch is not used. Of the four push buttons, only button 1 is used. With it one can toggle the clock through various displays as shown below. 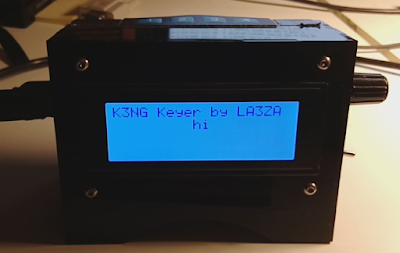 What I would like to have as well is an indication of lunar visibility at the actual location with azimuth and elevation for the moon. So far I haven’t had success in finding a suitable Arduino library for that, but I’m hoping that a reader of this blog may help me.

The post “Yet another Arduino clock” first appeared on the LA3ZA Radio & Electronics Blog.